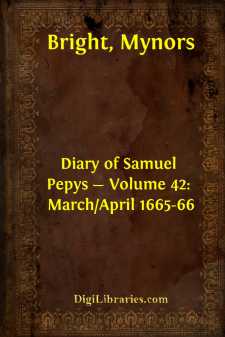 March 1st. Up, and to the office and there all the morning sitting and at noon to dinner with my Lord Bruncker, Sir W. Batten and Sir W. Pen at the White Horse in Lumbard Streete, where, God forgive us! good sport with Captain Cocke's having his mayde sicke of the plague a day or two ago and sent to the pest house, where she now is, but he will not say anything but that she is well. But blessed be God! a good Bill this week we have; being but 237 in all, and 42 of the plague, and of them but six in the City: though my Lord Bruneker says, that these six are most of them in new parishes where they were not the last week. Here was with us also Mr. Williamson, who the more I know, the more I honour. Hence I slipt after dinner without notice home and there close to my business at my office till twelve at night, having with great comfort returned to my business by some fresh vowes in addition to my former, and-more severe, and a great joy it is to me to see myself in a good disposition to business. So home to supper and to my Journall and to bed.

2nd. Up, as I have of late resolved before 7 in the morning and to the office, where all the morning, among other things setting my wife and Mercer with much pleasure to worke upon the ruling of some paper for the making of books for pursers, which will require a great deale of worke and they will earn a good deale of money by it, the hopes of which makes them worke mighty hard. At noon dined and to the office again, and about 4 o'clock took coach and to my Lord Treasurer's and thence to Sir Philip Warwicke's new house by appointment, there to spend an houre in talking and we were together above an hour, and very good discourse about the state of the King as to money, and particularly in the point of the Navy. He endeavours hard to come to a good understanding of Sir G. Carteret's accounts, and by his discourse I find Sir G. Carteret must be brought to it, and what a madman he is that he do not do it of himself, for the King expects the Parliament will call upon him for his promise of giving an account of the money, and he will be ready for it, which cannot be, I am sure, without Sir G. Carteret's accounts be better understood than they are. He seems to have a great esteem of me and my opinion and thoughts of things. After we had spent an houre thus discoursing and vexed that we do but grope so in the darke as we do, because the people, that should enlighten us, do not helpe us, we resolved fitting some things for another meeting, and so broke up. He shewed me his house, which is yet all unhung, but will be a very noble house indeed. Thence by coach calling at my bookseller's and carried home L10 worth of books, all, I hope, I shall buy a great while. There by appointment find Mr. Hill come to sup and take his last leave of me, and by and by in comes Mr. James Houbland to bear us company, a man I love mightily, and will not lose his acquaintance. He told me in my eare this night what he and his brothers have resolved to give me, which is L200, for helping them out with two or three ships....