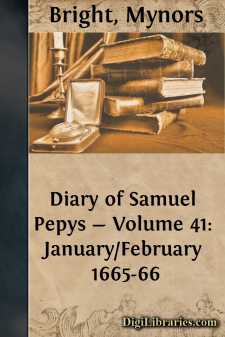 January 1st (New-Yeare's Day). Called up by five o'clock, by my order, by Mr. Tooker, who wrote, while I dictated to him, my business of the Pursers; and so, without eating or drinking, till three in the afternoon, and then, to my great content, finished it. So to dinner, Gibson and he and I, and then to copying it over, Mr. Gibson reading and I writing, and went a good way in it till interrupted by Sir W. Warren's coming, of whom I always learne something or other, his discourse being very good and his brains also. He being gone we to our business again, and wrote more of it fair, and then late to bed.

[This document is in the British Museum (Harleian MS. 6287), and is entitled, "A Letter from Mr. Pepys, dated at Greenwich, 1 Jan. 1665-6, which he calls his New Year's Gift to his hon. friend, Sir Wm. Coventry, wherein he lays down a method for securing his Majesty in husbandly execution of the Victualling Part of the Naval Expence." It consists of nineteen closely written folio pages, and is a remarkable specimen of Pepys's business habits.—B. There are copies of several letters on the victualling of the navy, written by Pepys in 1666, among the Rawlinson MSS. in the Bodleian.]

2nd. Up by candlelight again, and wrote the greatest part of my business fair, and then to the office, and so home to dinner, and after dinner up and made an end of my fair writing it, and that being done, set two entering while to my Lord Bruncker's, and there find Sir J. Minnes and all his company, and Mr. Boreman and Mrs. Turner, but, above all, my dear Mrs. Knipp, with whom I sang, and in perfect pleasure I was to hear her sing, and especially her little Scotch song of "Barbary Allen;"

[The Scottish ballad is entitled, "Sir John Grehme and Barbara Allan," and the English version, "Barbara Allen's Cruelty." Both are printed in Percy's "Reliques," Series III.]

and to make our mirthe the completer, Sir J. Minnes was in the highest pitch of mirthe, and his mimicall tricks, that ever I saw, and most excellent pleasant company he is, and the best mimique that ever I saw, and certainly would have made an excellent actor, and now would be an excellent teacher of actors. Thence, it being post night, against my will took leave, but before I come to my office, longing for more of her company, I returned and met them coming home in coaches, so I got into the coach where Mrs. Knipp was and got her upon my knee (the coach being full) and played with her breasts and sung, and at last set her at her house and so good night. So home to my lodgings and there endeavoured to have finished the examining my papers of Pursers' business to have sent away to-night, but I was so sleepy with my late early risings and late goings to bed that I could not do it, but was forced to go to bed and leave it to send away to-morrow by an Expresse.

3rd. Up, and all the morning till three in the afternoon examining and fitting up my Pursers' paper and sent it away by an Expresse. Then comes my wife, and I set her to get supper ready against I go to the Duke of Albemarle and back again; and at the Duke's with great joy I received the good news of the decrease of the plague this week to 70, and but 253 in all; which is the least Bill hath been known these twenty years in the City....