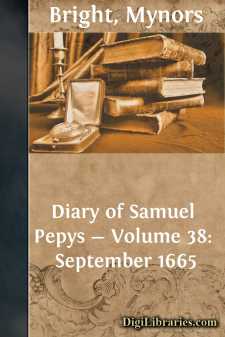 September 1st. Up, and to visit my Lady Pen and her daughter at the Ropeyarde where I did breakfast with them and sat chatting a good while. Then to my lodging at Mr. Shelden's, where I met Captain Cocke and eat a little bit of dinner, and with him to Greenwich by water, having good discourse with him by the way. After being at Greenwich a little while, I to London, to my house, there put many more things in order for my totall remove, sending away my girle Susan and other goods down to Woolwich, and I by water to the Duke of Albemarle, and thence home late by water. At the Duke of Albemarle's I overheard some examinations of the late plot that is discoursed of and a great deale of do there is about it. Among other discourses, I heard read, in the presence of the Duke, an examination and discourse of Sir Philip Howard's, with one of the plotting party. In many places these words being, "Then," said Sir P. Howard, "if you so come over to the King, and be faithfull to him, you shall be maintained, and be set up with a horse and armes," and I know not what. And then said such a one, "Yes, I will be true to the King." "But, damn me," said Sir Philip, "will you so and so?" And thus I believe twelve times Sir P. Howard answered him a "damn me," which was a fine way of rhetorique to persuade a Quaker or Anabaptist from his persuasion. And this was read in the hearing of Sir P. Howard, before the Duke and twenty more officers, and they make sport of it, only without any reproach, or he being anything ashamed of it!

[This republican plot was described by the Lord Chancellor in a speech delivered on October 9th, when parliament met at Oxford.]

But it ended, I remember, at last, "But such a one (the plotter) did at last bid them remember that he had not told them what King he would be faithfull to."

2nd. This morning I wrote letters to Mr. Hill and Andrews to come to dine with me to-morrow, and then I to the office, where busy, and thence to dine with Sir J. Minnes, where merry, but only that Sir J. Minnes who hath lately lost two coach horses, dead in the stable, has a third now a dying. After dinner I to Deptford, and there took occasion to 'entrar a la casa de la gunaica de ma Minusier', and did what I had a mind . . . To Greenwich, where wrote some letters, and home in pretty good time.

3rd (Lord's day). Up; and put on my coloured silk suit very fine, and my new periwigg, bought a good while since, but durst not wear, because the plague was in Westminster when I bought it; and it is a wonder what will be the fashion after the plague is done, as to periwiggs, for nobody will dare to buy any haire, for fear of the infection, that it had been cut off of the heads of people dead of the plague. Before church time comes Mr. Hill (Mr. Andrews failing because he was to receive the Sacrament), and to church, where a sorry dull parson, and so home and most excellent company with Mr. Hill and discourse of musique. I took my Lady Pen home, and her daughter Pegg, and merry we were; and after dinner I made my wife show them her pictures, which did mad Pegg Pen, who learns of the same man and cannot do so well....