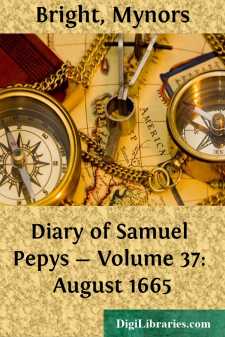 August 1st. Slept, and lay long; then up and my Lord [Crew] and Sir G. Carteret being gone abroad, I first to see the bridegroom and bride, and found them both up, and he gone to dress himself. Both red in the face, and well enough pleased this morning with their night's lodging. Thence down and Mr. Brisband and I to billiards: anon come my Lord and Sir G. Carteret in, who have been looking abroad and visiting some farms that Sir G. Carteret hath thereabouts, and, among other things, report the greatest stories of the bigness of the calfes they find there, ready to sell to the butchers, as big, they say, as little Cowes, and that they do give them a piece of chalke to licke, which they hold makes them white in the flesh within. Very merry at dinner, and so to talk and laugh after dinner, and up and down, some to [one] place, some to another, full of content on all sides. Anon about five o'clock, Sir G. Carteret and his lady and I took coach with the greatest joy and kindnesse that could be from the two familys or that ever I saw with so much appearance, and, I believe, reality in all my life. Drove hard home, and it was night ere we got to Deptford, where, with much kindnesse from them to me, I left them, and home to the office, where I find all well, and being weary and sleepy, it being very late, I to bed.

2nd. Up, it being a publique fast, as being the first Wednesday of the month, for the plague; I within doors all day, and upon my monthly accounts late, and there to my great joy settled almost all my private matters of money in my books clearly, and allowing myself several sums which I had hitherto not reckoned myself sure of, because I would not be over sure of any thing, though with reason I might do it, I did find myself really worth L1900, for which the great God of Heaven and Earth be praised! At night to the office to write a few letters, and so home to bed, after fitting myself for tomorrow's journey.

3rd. Up, and betimes to Deptford to Sir G. Carteret's, where, not liking the horse that had been hired by Mr. Uthwayt for me, I did desire Sir G. Carteret to let me ride his new L40 horse, which he did, and so I left my 'hacquenee'—[Haquenee = an ambling nag fitted for ladies' riding.]—behind, and so after staying a good while in their bedchamber while they were dressing themselves, discoursing merrily, I parted and to the ferry, where I was forced to stay a great while before I could get my horse brought over, and then mounted and rode very finely to Dagenhams; all the way people, citizens, walking to and again to enquire how the plague is in the City this week by the Bill; which by chance, at Greenwich, I had heard was 2,020 of the plague, and 3,000 and odd of all diseases; but methought it was a sad question to be so often asked me. Coming to Dagenhams, I there met our company coming out of the house, having staid as long as they could for me; so I let them go a little before, and went and took leave of my Lady Sandwich, good woman, who seems very sensible of my service in this late business, and having her directions in some things, among others, to get Sir G....