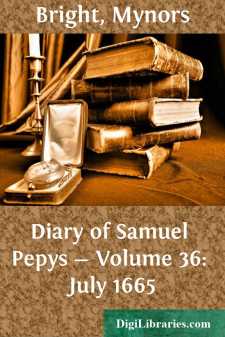 July 1st, 1665. Called up betimes, though weary and sleepy, by appointment by Mr. Povy and Colonell Norwood to discourse about some payments of Tangier. They gone, I to the office and there sat all the morning. At noon dined at home, and then to the Duke of Albemarle's, by appointment, to give him an account of some disorder in the Yarde at Portsmouth, by workmen's going away of their owne accord, for lacke of money, to get work of hay-making, or any thing else to earne themselves bread.

[There are several letters among the State Papers from Commissioner Thomas Middleton relating to the want of workmen at Portsmouth Dockyard. On June 29th Middleton wrote to Pepys, "The ropemakers have discharged themselves for want of money, and gone into the country to make hay." The blockmakers, the joiners, and the sawyers all refused to work longer without money ("Calendar," 1664-65, p. 453).]

Thence to Westminster, where I hear the sicknesse encreases greatly, and to the Harp and Ball with Mary talking, who tells me simply her losing of her first love in the country in Wales, and coming up hither unknown to her friends, and it seems Dr. Williams do pretend love to her, and I have found him there several times. Thence by coach and late at the office, and so to bed. Sad at the newes that seven or eight houses in Bazing Hall street, are shut up of the plague.

2nd (Sunday). Up, and all the morning dressing my closet at the office with my plates, very neatly, and a fine place now it is, and will be a pleasure to sit in, though I thank God I needed none before. At noon dined at home, and after dinner to my accounts and cast them up, and find that though I have spent above L90 this month yet I have saved L17, and am worth in all above L1450, for which the Lord be praised! In the evening my Lady Pen and daughter come to see, and supped with us, then a messenger about business of the office from Sir G. Carteret at Chatham, and by word of mouth did send me word that the business between my Lord and him is fully agreed on,

[The arrangements for the marriage of Lady Jemimah Montagu to Philip     Carteret were soon settled, for the wedding took place on July 31st]

and is mightily liked of by the King and the Duke of Yorke, and that he sent me this word with great joy; they gone, we to bed. I hear this night that Sir J. Lawson was buried late last night at St. Dunstan's by us, without any company at all, and that the condition of his family is but very poor, which I could be contented to be sorry for, though he never was the man that ever obliged me by word or deed.

3rd. Up and by water with Sir W. Batten and Sir J. Minnes to White Hall to the Duke of Albemarle, where, after a little business, we parted, and I to the Harp and Ball, and there staid a while talking to Mary, and so home to dinner. After dinner to the Duke of Albemarle's again, and so to the Swan, and there 'demeurais un peu'de temps con la fille', and so to the Harp and Ball, and alone 'demeurais un peu de temps baisant la', and so away home and late at the office about letters, and so home, resolving from this night forwards to close all my letters, if possible, and end all my business at the office by daylight, and I shall go near to do it and put all my affairs in the world in good order, the season growing so sickly, that it is much to be feared how a man can escape having a share with others in it, for which the good Lord God bless me, or to be fitted to receive it. So after supper to bed, and mightily troubled in my sleep all night with dreams of Jacke Cole, my old schoolfellow, lately dead, who was born at the same time with me, and we reckoned our fortunes pretty equal....