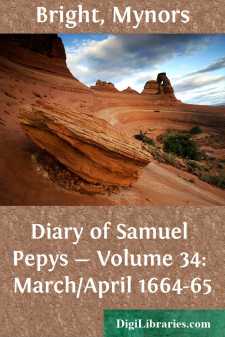 March 1st. Up, and this day being the day than: by a promise, a great while ago, made to my wife, I was to give her L20 to lay out in clothes against Easter, she did, notwithstanding last night's falling out, come to peace with me and I with her, but did boggle mightily at the parting with my money, but at last did give it her, and then she abroad to buy her things, and I to my office, where busy all the morning. At noon I to dinner at Trinity House, and thence to Gresham College, where Mr. Hooke read a second very curious lecture about the late Comett; among other things proving very probably that this is the very same Comett that appeared before in the year 1618, and that in such a time probably it will appear again, which is a very new opinion; but all will be in print. Then to the meeting, where Sir G. Carteret's two sons, his owne, and Sir N. Slaning, were admitted of the society: and this day I did pay my admission money, 40s. to the society. Here was very fine discourses and experiments, but I do lacke philosophy enough to understand them, and so cannot remember them. Among others, a very particular account of the making of the several sorts of bread in France, which is accounted the best place for bread in the world. So home, where very busy getting an answer to some question of Sir Philip Warwicke touching the expense of the navy, and that being done I by coach at 8 at night with my wife and Mercer to Sir Philip's and discoursed with him (leaving them in the coach), and then back with them home and to supper and to bed.

2nd. Begun this day to rise betimes before six o'clock, and, going down to call my people, found Besse and the girle with their clothes on, lying within their bedding upon the ground close by the fireside, and a candle burning all night, pretending they would rise to scoure. This vexed me, but Besse is going and so she will not trouble me long. Up, and by water to Burston about my Lord's plate, and then home to the office, so there all the morning sitting. At noon dined with Sir W. Batten (my wife being gone again to-day to buy things, having bought nothing yesterday for lack of Mrs. Pierces company), and thence to the office again, where very busy till 12 at night, and vexed at my wife's staying out so late, she not being at home at 9 o'clock, but at last she is come home, but the reason of her stay I know not yet. So shut up my books, and home to supper and to bed.

3rd. Up, and abroad about several things, among others to see Mr. Peter Honiwood, who was at my house the other day, and I find it was for nothing but to pay me my brother John's Quarterage. Thence to see Mrs. Turner, who takes it mighty ill I did not come to dine with the Reader, her husband, which, she says, was the greatest feast that ever was yet kept by a Reader, and I believe it was well. But I am glad I did not go, which confirms her in an opinion that I am growne proud. Thence to the 'Change, and to several places, and so home to dinner and to my office, where till 12 at night writing over a discourse of mine to Mr....