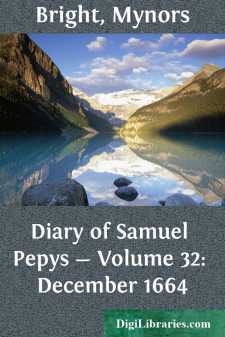 December 1st. Up betimes and to White Hall to a Committee of Tangier, and so straight home and hard to my business at my office till noon, then to dinner, and so to my office, and by and by we sat all the afternoon, then to my office again till past one in the morning, and so home to supper and to bed.

2nd. Lay long in bed. Then up and to the office, where busy all the morning. At home dined. After dinner with my wife and Mercer to the Duke's House, and there saw "The Rivalls," which I had seen before; but the play not good, nor anything but the good actings of Betterton and his wife and Harris. Thence homeward, and the coach broke with us in Lincoln's Inn Fields, and so walked to Fleete Streete, and there took coach and home, and to my office, whither by and by comes Captain Cocke, and then Sir W. Batten, and we all to Sir J. Minnes, and I did give them a barrel of oysters I had given to me, and so there sat and talked, where good discourse of the late troubles, they knowing things, all of them, very well; and Cocke, from the King's own mouth, being then entrusted himself much, do know particularly that the King's credulity to Cromwell's promises, private to him, against the advice of his friends and the certain discovery of the practices and discourses of Cromwell in council (by Major Huntington)

[According to Clarendon the officer here alluded to was a major in Cromwell's own regiment of horse, and employed by him to treat with Charles I. whilst at Hampton Court; but being convinced of the insincerity of the proceeding, communicated his suspicions to that monarch, and immediately gave up his commission. We hear no more of Huntington till the Restoration, when his name occurs with those of many other officers, who tendered their services to the king. His reasons for laying down his commission are printed in Thurloe's "State Papers" and Maseres's "Tracts."—B.]

did take away his life and nothing else. Then to some loose atheisticall discourse of Cocke's, when he was almost drunk, and then about 11 o'clock broke up, and I to my office, to fit up an account for Povy, wherein I hope to get something. At it till almost two o'clock, then to supper and to bed.

3rd. Up, and at the office all the morning, and at noon to Mr. Cutler's, and there dined with Sir W. Rider and him, and thence Sir W. Rider and I by coach to White Hall to a Committee of the Fishery; there only to hear Sir Edward Ford's proposal about farthings, wherein, O God! to see almost every body interested for him; only my Lord Annesly, who is a grave, serious man. My Lord Barkeley was there, but is the most hot, fiery man in discourse, without any cause, that ever I saw, even to breach of civility to my Lord Anglesey, in his discourse opposing to my Lord's. At last, though without much satisfaction to me, it was voted that it should be requested of the King, and that Sir Edward Ford's proposal is the best yet made. Thence by coach home. The Duke of Yorke being expected to-night with great joy from Portsmouth, after his having been abroad at sea three or four days with the fleete; and the Dutch are all drawn into their harbours....