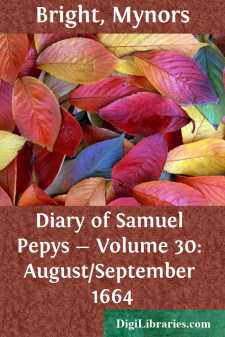 August 1st. Up, my mind very light from my last night's accounts, and so up and with Sir J. Minnes, Sir W. Batten, and Sir W. Pen to St. James's, where among other things having prepared with some industry every man a part this morning and no sooner (for fear they should either consider of it or discourse of it one to another) Mr. Coventry did move the Duke and obtain it that one of the clerkes of the Clerke of the Acts should have an addition of L30 a year, as Mr. Turner hath, which I am glad of, that I may give T. Hater L20 and keep L10 towards a boy's keeping. Thence Mr. Coventry and I to the Attorney's chamber at the Temple, but not being there we parted, and I home, and there with great joy told T. Hater what I had done, with which the poor wretch was very glad, though his modesty would not suffer him to say much. So to the Coffee-house, and there all the house full of the victory Generall Soushe

(who is a Frenchman, a soldier of fortune, commanding part of the German army) hath had against the Turke; killing 4,000 men, and taking most extraordinary spoil. Thence taking up Harman and his wife, carried them to Anthony Joyce's, where we had my venison in a pasty well done; but, Lord! to see how much they made of, it, as if they had never eat any before, and very merry we were, but Will most troublesomely so, and I find he and his wife have a most wretched life one with another, but we took no notice, but were very merry as I could be in such company. But Mrs. Harman is a very pretty-humoured wretch, whom I could love with all my heart, being so good and innocent company. Thence to Westminster to Mr. Blagrave's, and there, after singing a thing or two over, I spoke to him about a woman for my wife, and he offered me his kinswoman, which I was glad of, but she is not at present well, but however I hope to have her. Thence to my Lord Chancellor's, and thence with Mr. Coventry, who appointed to meet me there, and with him to the Attorney General, and there with Sir Ph. Warwicke consulted of a new commission to be had through the Broad Seale to enable us to make this contract for Tangier victualling. So home, and there talked long with Will about the young woman of his family which he spoke of for to live with my wife, but though she hath very many good qualitys, yet being a neighbour's child and young and not very staid, I dare not venture of having her, because of her being able to spread any report of our family upon any discontent among the heart of our neighbours. So that my dependance is upon Mr. Blagrave, and so home to supper and to bed. Last night, at 12 o'clock, I was waked with knocking at Sir W. Pen's door; and what was it but people's running up and down to bring him word that his brother,

[George Penn, the elder brother of Sir W. Penn, was a wealthy merchant at San Lucar, the port of Seville. He was seized as a heretic by the Holy Office, and cast into a dungeon eight feet square and dark as the grave....