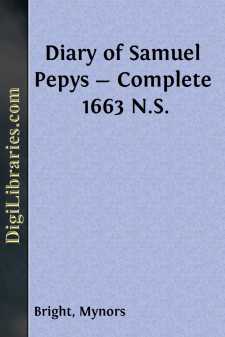 January 1st, Lay with my wife at my Lord's lodgings, where I have been these two nights, till 10 o'clock with great pleasure talking, then I rose and to White Hall, where I spent a little time walking among the courtiers, which I perceive I shall be able to do with great confidence, being now beginning to be pretty well known among them. Then to my wife again, and found Mrs. Sarah with us in the chamber we lay in. Among other discourse, Mrs. Sarah tells us how the King sups at least four or [five] times every week with my Lady Castlemaine; and most often stays till the morning with her, and goes home through the garden all alone privately, and that so as the very centrys take notice of it and speak of it. She tells me, that about a month ago she [Lady Castlemaine] quickened at my Lord Gerard's at dinner, and cried out that she was undone; and all the lords and men were fain to quit the room, and women called to help her. In fine, I find that there is nothing almost but bawdry at Court from top to bottom, as, if it were fit, I could instance, but it is not necessary; only they say my Lord Chesterfield, groom of the stole to the Queen, is either gone or put away from the Court upon the score of his lady's having smitten the Duke of York, so as that he is watched by the Duchess of York, and his lady is retired into the country upon it. How much of this is true, God knows, but it is common talk. After dinner I did reckon with Mrs. Sarah for what we have eat and drank here, and gave her a crown, and so took coach, and to the Duke's House, where we saw "The Villaine" again; and the more I see it, the more I am offended at my first undervaluing the play, it being very good and pleasant, and yet a true and allowable tragedy. The house was full of citizens, and so the less pleasant, but that I was willing to make an end of my gaddings, and to set to my business for all the year again tomorrow. Here we saw the old Roxalana in the chief box, in a velvet gown, as the fashion is, and very handsome, at which I was glad. Hence by coach home, where I find all well, only Sir W. Pen they say ill again. So to my office to set down these two or three days' journall, and to close the last year therein, and so that being done, home to supper, and to bed, with great pleasure talking and discoursing with my wife of our late observations abroad.

2nd. Lay long in bed, and so up and to the office, where all the morning alone doing something or another. So dined at home with my wife, and in the afternoon to the Treasury office, where Sir W. Batten was paying off tickets, but so simply and arbitrarily, upon a dull pretence of doing right to the King, though to the wrong of poor people (when I know there is no man that means the King less right than he, or would trouble himself less about it, but only that he sees me stir, and so he would appear doing something, though to little purpose), that I was weary of it. At last we broke up, and walk home together, and I to see Sir W....