Diaries of Sir Moses and Lady Montefiore, Volume I Comprising Their Life and Work as Recorded in Their Diaries From 1812 to 1883 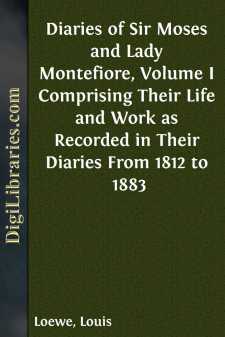 The neighbourhood of the Tower of London was, a hundred years ago, the centre of attraction for thousands of persons engaged in financial pursuits, not so much on account of the protection which the presence of the garrison might afford in case of tumult, as of the convenience offered by the locality from its vicinity to the wharves, the Custom House, the Mint, the Bank, the Royal Exchange, and many important counting-houses and places of business. For those who took an interest in Hebrew Communal Institutions, it possessed the additional advantage of being within ten minutes or a quarter of an hour's walk of the Spanish and Portuguese Synagogue and the Great German Synagogue, together with their Colleges and Schools, and several minor places of worship.

Tower Hill, the Minories, and the four streets enclosing the Tenter Ground were then favourite places of residence for the merchant; and in one of these, Great Prescott Street, lived Levi Barent Cohen, the father of Judith, afterwards Lady Montefiore.

He was a wealthy merchant from Amsterdam, who settled in England, where fortune favoured his commercial undertakings.

In his own country his name is to this day held in great respect. He not only during his lifetime kept up a cordial correspondence with his friends and relatives—who were indebted to him for many acts of kindness—but, wishing to have his name commemorated in the House of Prayer by some act of charity, he bequeathed a certain sum of money to be given annually to the poor, in consideration of which, he desired to have some of the Daily Prayers offered up from the very place which he used to occupy in the Synagogue of his native city.

He was a man, upright in all his transactions, and a strict adherent to the tenets of his religion. He was of a very kind and sociable disposition, which prompted him to keep open house for his friends and visitors, whom he always received with the most generous hospitality. He was first married to Fanny, a daughter of Joseph Diamantschleifer of Amsterdam, by whom he had three children: two sons, Solomon and Joseph, and one daughter, Fanny.

Solomon became the father-in-law of the late Sir David Salomons, and Joseph the father of the late Mr Louis Cohen. Fanny married Salomon Hyman Cohen Wessels, of Amsterdam, a gentleman who was well known at that time for his philanthropy, and whose family, at the period of Napoleon I., was held in great esteem among the aristocracy of Holland.

Mrs Levi Barent Cohen unfortunately died at an early age, and Mr Cohen married her sister Lydia, by whom he had seven children: five daughters—Hannah, Judith, Jessy, Adelaide, and Esther; and two sons—Isaac and Benjamin.

Judith, one of the subjects of these Memoirs, was born, according to the entry in one of Sir Moses' Diaries, on the 20th February 1784; her birthday, however, was generally celebrated at East Cliff Lodge in the month of October, in conjunction with another festivity held there on the first Saturday after the Tabernacle Holidays.

With regard to most persons noted for their character or ability, there exists a tradition of some unusual occurrence happening during their early life. In the case of Lady Montefiore, there is an event which she once related to me herself.

"When I was a little girl," she said, "about three or four years old, I fell over the railing of a staircase, quite two storeys high, into the hall below. Everybody in the house thought I must be killed, but when they came to pick me up they found me quietly seated as if nothing in the world had happened to me."

It was a characteristic of hers which was subsequently much noticed by those around her, that, no matter in what circumstances she was placed, when others were excited or depressed by some painful event or the fear of approaching peril, she would remain calm, and retain her presence of mind. She would endeavour to cheer and strengthen others by words of hope, and where it was possible to avoid any threatened danger, she would quietly give her opinion as to the best course to be pursued....