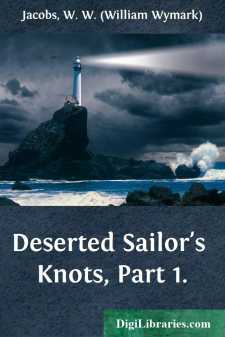 "Sailormen ain't wot you might call dandyfied as a rule," said the night- watchman, who had just had a passage of arms with a lighterman and been advised to let somebody else wash him and make a good job of it; "they've got too much sense. They leave dressing up and making eyesores of theirselves to men wot 'ave never smelt salt water; men wot drift up and down the river in lighters and get in everybody's way."

He glanced fiercely at the retreating figure of the lighterman, and, turning a deaf ear to a request for a lock of his hair to patch a favorite doormat with, resumed with much vigor his task of sweeping up the litter.

The most dressy sailorman I ever knew, he continued, as he stood the broom up in a corner and seated himself on a keg, was a young feller named Rupert Brown. His mother gave 'im the name of Rupert while his father was away at sea, and when he came 'ome it was too late to alter it. All that a man could do he did do, and Mrs. Brown 'ad a black eye till 'e went to sea agin. She was a very obstinate woman, though—like most of 'em—and a little over a year arterwards got pore old Brown three months' hard by naming 'er next boy Roderick Alfonso.

Young Rupert was on a barge when I knew 'im fust, but he got tired of always 'aving dirty hands arter a time, and went and enlisted as a soldier. I lost sight of 'im for a while, and then one evening he turned up on furlough and come to see me.

O' course, by this time 'e was tired of soldiering, but wot upset 'im more than anything was always 'aving to be dressed the same and not being able to wear a collar and neck-tie. He said that if it wasn't for the sake of good old England, and the chance o' getting six months, he'd desert. I tried to give 'im good advice, and, if I'd only known 'ow I was to be dragged into it, I'd ha' given 'im a lot more.

As it 'appened he deserted the very next arternoon. He was in the Three Widders at Aldgate, in the saloon bar—which is a place where you get a penn'orth of ale in a glass and pay twopence for it—and, arter being told by the barmaid that she had got one monkey at 'ome, he got into conversation with another man wot was in there.

He was a big man with a black moustache and a red face, and 'is fingers all smothered in di'mond rings. He 'ad got on a gold watch-chain as thick as a rope, and a scarf-pin the size of a large walnut, and he had 'ad a few words with the barmaid on 'is own account. He seemed to take a fancy to Rupert from the fust, and in a few minutes he 'ad given 'im a big cigar out of a sealskin case and ordered 'im a glass of sherry wine.

"Have you ever thought o' going on the stage?" he ses, arter Rupert 'ad told 'im of his dislike for the Army.

"You s'prise me," ses the big man; "you're wasting of your life by not doing so."

"Stuff and nonsense!" ses the big man. "Don't tell me. You've got an actor's face. I'm a manager myself, and I know. I don't mind telling you that I refused twenty-three men and forty-eight ladies only yesterday."

"I wonder you don't drop down dead," ses the barmaid, lifting up 'is glass to wipe down the counter....