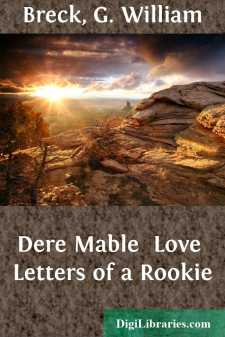 I guess you thought I was dead. Youll never know how near you was to right. We got the tents up at last, though, so I got a minit to rite. I guess they choose these camps by mail order. The only place there flat is on the map. Where our tents is would make a good place for a Rocky Mountin goat if he didnt break his neck. The first day the Captin came out an says "Pitch your tents here." Then he went to look for someone quick before anyone could ask him how. I wish I was a Captin. I guess he thought we was Alpine Chasers. Eh, Mable? But you probably dont know what those are.

Honest, Mable, if Id put in the work I done last week on the Panamah Canal it would have been workin long before it was. Of course there was a lot of fellos there with me but it seemed like all they did was to stand round and hand me shovels when I wore em out.

The Captin appresheates me though. The other day he watched me work awhile and then he says "Smith." He calls me Smith now. We got very friendly since I been nice to him. I noticed none of the other fellos had much to say to him. I felt kind of sorry for him. Hes a human bein even if he is a Captin, Mable. So every time I saw him I used to stop him and talk to him. Democratic. Thats me all over, Mable. "Smith" he says "If they was all like you round here war would be hell, no joke." By which he meant that we would make it hot for the Boshes.

I been feelin awful sorry for you, Mable. What with missin me and your fathers liver gone back on him again things must have been awful lonesome for you. It isnt as if you was a girl what had a lot of fellos hangin round all the time. Not that you couldnt have em, Mable, but you dont an theres no use makin no bones about it. If it hadnt been for me I guess things would have been pretty stupid though I dont begrudge you a cent. You know how I am with my money. I guess you ought to anyway. Eh, Mable? Never talk of money matters in connexun with a woman. Thats me all over.

"THE ONLY PLACE THERE FLAT IS ON THE MAP"

"YOU CAN READ EM TO YOUR GRANCHILDREN"

Now I got started an found a fountin pen an the Y.M.C.A. givin away paper like it does Im goin to rite you regular. They say there goin to charge three sents for a letter pretty soon. That aint goin to stop me though, Mable. There aint no power in heavin or earth, as the poets say, as can come between you and me, Mable. You mite send a few three sent stamps when you rite. That is if your fathers able to work yet. And willin, I should add.

Of course it aint nothin to me but Id keep these letters what you get from me as a record of the war. Some day you can read em to your granchildren an say "Your Granfather Bill did all these things." Aint I the worst, Mable? Serious though I havnt found noone so far what has thought of doin this except the newspapers. I guess Ill get a lot of inside stuff that theyll never see. So this may be the only one of its kind. But it doesnt matter to me what you do with them, Mable....