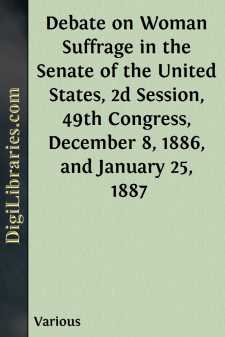 On the joint resolution (S.R. 5) proposing an amendment to the Constitution of the United States extending the right of suffrage to women.

Mr. PRESIDENT: I ask the Senate to proceed to the consideration of Order of Business 122, being the joint resolution (S.R. 5) proposing an amendment to the Constitution of the United States extending the right of suffrage to women.

The motion was agreed to.

The PRESIDENT pro tempore. The joint resolution will be read.

The Chief Clerk read as follows:

Joint resolution proposing an amendment to the Constitution of the United States extending the right of suffrage to women.

Resolved by the Senate and House of Representatives of the United States of America in Congress assembled (two-thirds of each House concurring therein), That the following article be proposed to the Legislatures of the several States as an amendment to the Constitution of the United States; which, when ratified by three-fourths of the said Legislatures, shall be valid as part of said Constitution, namely:

SEC. 2. The Congress shall have power, by appropriate legislation, to enforce the provisions of this article.

Mr. BLAIR. Mr. President, the question before the Senate is this: Shall a joint resolution providing for an amendment of the national Constitution, so that the right of citizens of the United States to vote shall not be denied or abridged by the United States, or by any State, on account of sex, and that Congress shall have power to enforce the article, be submitted to the Legislatures of the several States for ratification or rejection?

The answer to this question does not depend necessarily upon the reply to that other question, whether women ought to be permitted to exercise the right or privilege of suffrage as do men. The Legislatures of the several States must decide this in ratifying or rejecting the proposed amendment.

Upon solemn occasions concerning grave public affairs, and when large numbers of the citizens of the country desire to test the sentiments of the people upon an amendment of the organic law in the manner provided to be done by the provisions of that law, it may well become the duty of Congress to submit the proposition to the amending power, which is the same as that which created the original instrument itself—the people of the several States.

It can hardly be claimed that two-thirds of each branch of Congress must necessarily be convinced that the Constitution should be amended as proposed in the joint resolution to be submitted before it has discretion to submit the same to the judgment of the States. Any citizen has the right to petition or, through his representative, to bring in his bill for redress of grievances, or to promote the public good by legislation; and it can hardly be maintained that, before any citizen or large body of citizens shall have the privilege of introducing a bill to the great legislative tribunal, which alone has primary jurisdiction of the organic law and power to amend or change it, the Congress, which under the Constitution is simply the moving or initiating power, must by a two-thirds vote approve the proposition at issue before its discussion shall be permitted in the forum of the States....