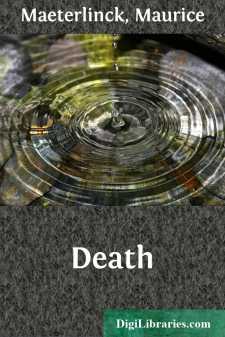 DEATH I OUR IDEA OF DEATH

It has been well said:

“Death and death alone is what we must consult about life; and not some vague future or survival, in which we shall not be present. It is our own end; and everything happens in the interval between death and now. Do not talk to me of those imaginary prolongations which wield over us the childish spell of number; do not talk to me—to me who am to die outright—of societies and peoples! There is no reality, there is no true duration, save that between the cradle and the grave. The rest is mere bombast, show, delusion! They call me a master because of some magic in my speech and thoughts; but I am a frightened child in the presence of death!”

That is where we stand. For us, death is the one event that counts in our life and in our universe. It is the point whereat all that escapes our vigilance unites and conspires against our happiness. The more our thoughts struggle to turn away from it, the closer do they press around it. The more we dread it, the more dreadful it becomes, for it battens but on our fears. He who seeks to forget it burdens his memory with it; he who tries to shun it meets naught else. But, though we think of death incessantly, we do so unconsciously, without learning to know death. We compel our attention to turn its back upon it, instead of going to it with uplifted head. We exhaust all our forces, which ought to face death boldly, in distracting our will from it. We deliver death into the dim hands of instinct and we grant it not one hour of our intelligence. Is it surprising that the idea of death, which should be the most perfect and the most luminous—being the most persistent and the most inevitable—remains the flimsiest of our ideas and the only one that is backward? How should we know the one power which we never looked in the face? How could it profit by flashes kindled only to help us escape it? To fathom its abysses, we wait until the most enfeebled, the most disordered moments of our life arrive. We do not think of death until we have no longer the strength, I will not say, to think, but even to breathe. A man returning among us from another century would not recognize without difficulty, in the depths of a present-day soul, the image of his gods, of his duty, of his love or of his universe; but the figure of death, when everything has changed around it and when even that which composes it and upon which it rests has vanished, he would find almost untouched, rough-drawn as it was by our fathers, hundreds, nay, thousands of years ago. Our intelligence, grown so bold and active, has not worked upon this figure, has added no single touch to it. Though we may no longer believe in the tortures of the damned, all the vital cells of the most skeptical among us are still steeped in the appalling mystery of the Hebrew Sheol, the pagan Hades, or the Christian Hell. Though it may no longer be lighted by very definite flames, the gulf still opens at the end of life, and, if less known, is all the more formidable....