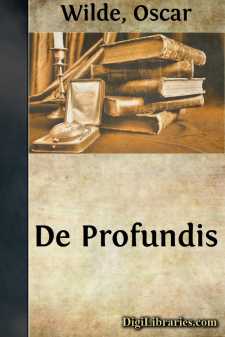 . . . Suffering is one very long moment.  We cannot divide it by seasons.  We can only record its moods, and chronicle their return.  With us time itself does not progress.  It revolves.  It seems to circle round one centre of pain.  The paralysing immobility of a life every circumstance of which is regulated after an unchangeable pattern, so that we eat and drink and lie down and pray, or kneel at least for prayer, according to the inflexible laws of an iron formula: this immobile quality, that makes each dreadful day in the very minutest detail like its brother, seems to communicate itself to those external forces the very essence of whose existence is ceaseless change.  Of seed-time or harvest, of the reapers bending over the corn, or the grape gatherers threading through the vines, of the grass in the orchard made white with broken blossoms or strewn with fallen fruit: of these we know nothing and can know nothing.

For us there is only one season, the season of sorrow.  The very sun and moon seem taken from us.  Outside, the day may be blue and gold, but the light that creeps down through the thickly-muffled glass of the small iron-barred window beneath which one sits is grey and niggard.  It is always twilight in one’s cell, as it is always twilight in one’s heart.  And in the sphere of thought, no less than in the sphere of time, motion is no more.  The thing that you personally have long ago forgotten, or can easily forget, is happening to me now, and will happen to me again to-morrow.  Remember this, and you will be able to understand a little of why I am writing, and in this manner writing. . . .

A week later, I am transferred here.  Three more months go over and my mother dies.  No one knew how deeply I loved and honoured her.  Her death was terrible to me; but I, once a lord of language, have no words in which to express my anguish and my shame.  She and my father had bequeathed me a name they had made noble and honoured, not merely in literature, art, archaeology, and science, but in the public history of my own country, in its evolution as a nation.  I had disgraced that name eternally.  I had made it a low by-word among low people.  I had dragged it through the very mire.  I had given it to brutes that they might make it brutal, and to fools that they might turn it into a synonym for folly.  What I suffered then, and still suffer, is not for pen to write or paper to record.  My wife, always kind and gentle to me, rather than that I should hear the news from indifferent lips, travelled, ill as she was, all the way from Genoa to England to break to me herself the tidings of so irreparable, so irremediable, a loss.  Messages of sympathy reached me from all who had still affection for me.  Even people who had not known me personally, hearing that a new sorrow had broken into my life, wrote to ask that some expression of their condolence should be conveyed to me. . . .

Three months go over.  The calendar of my daily conduct and labour that hangs on the outside of my cell door, with my name and sentence written upon it, tells me that it is May....