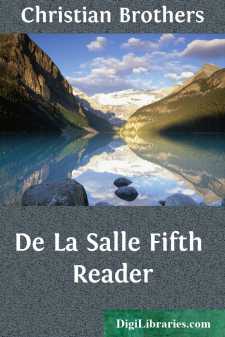 In this Fifth Reader of the De La Salle Series the plan of the preceding numbers has been continued. The pupil has now mastered the mechanical difficulties of learning to read, and has acquired a fairly good working vocabulary. Hence he is prepared to read intelligently and with some degree of fluency and pleasure. Now is the time to lead him to acquire a taste for good reading. The selections have been drawn mainly from authors whose writings are distinguished for their moral and literary value, and whose style is sure to excite a lasting interest.

In addition to giving the pupil practice in reading and forming a basis for oral and written composition work, these selections will raise his ideas of right living, will quicken his imagination, will give him his first knowledge of many things, stimulate his powers of observation, enlarge his vocabulary, and correct and refine his mode of expression. A wholesome reading habit, so important to-day, will thus be easily, pleasantly and unconsciously formed.

The following are some of the features of the book:

GUIDE TO PRONUNCIATION.-This Guide is to be referred to again and again, and the diacritical marks carefully taught. Instruction in the vowel sounds is an excellent drill in articulation, while a knowledge of the diacritical marks enables the pupil to master these sounds for himself when consulting the dictionary.

VARIETY OF MATTER.-In the volume will be found the best sentiments of the best writers. The pupil will find fables, nature studies, tales of travel and adventure, brave deeds from history and fiction, stories of loyalty and heroism, examples of sublime Christian self-sacrifice, and selections that teach industry, contentment, respect for authority, reverence for all things sacred, attachment to home, and fidelity to faith and Country.

LANGUAGE STUDY.-If reading is to hold its proper place in the class room, the teaching of it must not be confined to the mere reading of the text. In its truest sense, reading is far more comprehensive. The teacher will question the pupil on what he has read, point out to him the beauties of thought and language, find out what hold the reading has taken upon his memory, how it has aroused his imagination, assisted his judgment, directed his will, and contributed to his fund of general information. To assist in this most important work is the object aimed at in the matter given for Language Study. Such study will also give fuller powers of interpretation and corresponding appreciation of the selection considered simply as literature.

RECITATIONS.-There are some selections marked for recitation. The public recitation of these extracts will banish awkwardness of manner, beget self-confidence, and lay the foundation for subsequent elocutionary work. Besides, experience teaches that a single poem or address based upon some heroic or historic event, recited before a class or a school, will often do more to build up a noble character and foster a love of history, than a full term of instruction by question and answer.

POETRY.-The numerous poetic selections, some of which are partly analyzed by way of suggestion, will create a love for the highest and purest forms of literature, will broaden the field of knowledge, and emphasize the teachings of some of the prose selections. Many of them have been written by American authors. Every American boy and girl should be acquainted with the works of poets who have done so much for the development of American literature and nationality.

MEMORY GEMS.-"The memorizing of choice bits of prose and poetry enriches the vocabulary of the pupils, adorns their memory, suggests delicate and noble thoughts, and puts them in possession of sentences of the best construction....