Dawn O'Hara, the Girl Who Laughed 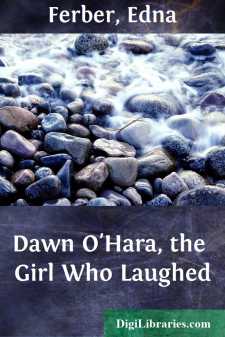 CHAPTER I. THE SMASH-UP

There are a number of things that are pleasanter than being sick in a New York boarding-house when one's nearest dearest is a married sister up in far-away Michigan.

Some one must have been very kind, for there were doctors, and a blue-and-white striped nurse, and bottles and things. There was even a vase of perky carnations—scarlet ones. I discovered that they had a trick of nodding their heads, saucily. The discovery did not appear to surprise me.

"Howdy-do!" said I aloud to the fattest and reddest carnation that overtopped all the rest. "How in the world did you get in here?"

The striped nurse (I hadn't noticed her before) rose from some corner and came swiftly over to my bedside, taking my wrist between her fingers.

"I wasn't talking to you," I snapped, crossly, "I was speaking to the carnations; particularly to that elderly one at the top—the fat one who keeps bowing and wagging his head at me."

"Oh, yes," answered the striped nurse, politely, "of course. That one is very lively, isn't he? But suppose we take them out for a little while now."

She picked up the vase and carried it into the corridor, and the carnations nodded their heads more vigorously than ever over her shoulder.

I heard her call softly to some one. The some one answered with a sharp little cry that sounded like, "Conscious!"

The next moment my own sister Norah came quietly into the room, and knelt at the side of my bed and took me in her arms. It did not seem at all surprising that she should be there, patting me with reassuring little love pats, murmuring over me with her lips against my check, calling me a hundred half-forgotten pet names that I had not heard for years. But then, nothing seemed to surprise me that surprising day. Not even the sight of a great, red-haired, red-faced, scrubbed looking man who strolled into the room just as Norah was in the midst of denouncing newspapers in general, and my newspaper in particular, and calling the city editor a slave-driver and a beast. The big, red-haired man stood regarding us tolerantly.

"Better, eh?" said he, not as one who asks a question, but as though in confirmation of a thought. Then he too took my wrist between his fingers. His touch was very firm and cool. After that he pulled down my eyelids and said, "H'm." Then he patted my cheek smartly once or twice. "You'll do," he pronounced. He picked up a sheet of paper from the table and looked it over, keen-eyed. There followed a clinking of bottles and glasses, a few low-spoken words to the nurse, and then, as she left the room the big red-haired man seated himself heavily in the chair near the bedside and rested his great hands on his fat knees. He stared down at me in much the same way that a huge mastiff looks at a terrier. Finally his glance rested on my limp left hand.

For a moment the word would not come. I could hear Norah catch her breath quickly. Then—"Yes," answered I....