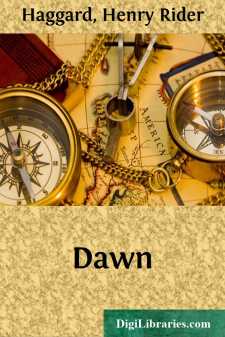 "You lie; you always were a liar, and you always will be a liar. You told my father how I spent the money."

"Well, and what if I did? I had to look after myself, I suppose. You forget that I am only here on sufferance, whilst you are the son of the house. It does not matter to you, but he would have turned me out of doors," whined George.

"Oh! curse your fine words; it's you who forget, you swab. Ay, it's you who forget that you asked me to take the money to the gambling- tent, and made me promise that you should have half of what we won, but that I should play for both. What, are you beginning to remember now—is it coming back to you after a whole month? I am going to quicken your memory up presently, I can tell you; I have got a good deal to pay off, I'm thinking. I know what you are at; you want to play cuckoo, to turn 'Cousin Philip' out that 'Cousin George' may fill the nest. You know the old man's soft points, and you keep working him up against me. You think that you would like the old place when he's gone—ay, and I daresay that you will get it before you have done, but I mean to have my penn'orth out of you now, at any rate," and, brushing the tears of anger that stood in his brown eyes away with the back of his hand, the speaker proceeded to square up to George in a most determined way.

Now Philip, with his broad shoulders and his firm-knit frame, would, even at eighteen, have been no mean antagonist for a full-grown man; much more then did he look formidable to the lankly, overgrown stripling crouching against the corner of the wall that prevented his further retreat.

"Philip, you're not going to strike me, are you, when you know you are so much stronger?"

"Yes, I am, though; if I can't match you with my tongue, at any rate I will use my fists. Look out."

"Tell him! why, of course you will, I know that; but you shall have something to lie about this time," and he advanced to the attack with a grim determination not pleasant for his cousin to behold.

Finding that there was no escape, George turned upon him with so shrill a curse that it even frightened from his leafy perch in the oak above the tame turtle-dove, intensely preoccupied as he was in cooing to a new-found mate. He did more than curse; he fought like a cornered rat, and with as much chance as the rat with a trained fox-terrier. In a few seconds his head was as snugly tucked away in the chancery of his cousin's arm as ever any property was in the court of that name, and, to speak truth, it seemed quite possible that, when it emerged from its retreat, it would, like the property, be much dilapidated and extensively bled.

Let us not dwell upon the scene; for George it was a very painful one, so painful that he never quite forgot it. His nose, too, was never so straight again. It was soon over, though to one of the parties time went with unnatural slowness.

"Well, I think you've had about enough for once," soliloquized Philip, as he critically surveyed the writhing mass on the ground before him; and he looked a very handsome lad as he said it....