Dave Dashaway and His Hydroplane 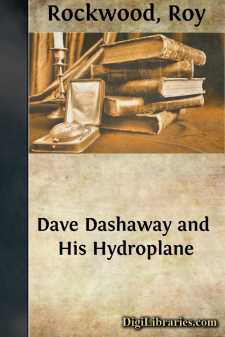 The messenger boy who had just entered the hangar of the great prize monoplane of the aero meet at Columbus, stared wonderingly about him while the man in charge of the place receipted for the telegram.

The lad had never been in so queer a place before. He was a lively, active city boy, but the closest he had ever seen an airship was a distance away and five hundred feet up in the air. Now, with big wonder eyes he stared at the strange appearing machine. His fingers moved restlessly, like a street-urchin surveying an automobile and longing to blow its horn.

The man in charge of the place attracted his attention, too. He had only one arm and limped when he walked. His face was scarred and he looked like a war veteran. The only battles this old warrior had been in, however, were fights with the elements. He was a famous "wind wagon" man who had sustained a terrible fall in an endurance race. It had crippled him for life. Now he followed the various professional meets for a living, and also ran an aviation school for amateurs. His name was John Grimshaw.

The messenger boy took a last look about the place and left. The old man put on a cap, went to the door and rather gruesomely faced the elements.

"A cold drizzling rain and gusty weather generally," he said to himself in a grumbling tone. "I'll face it any time for Dashaway, though. The telegram may be important."

The big aero field looked lonely and gloomy as the man crossed it. Lights showed here and there in the various buildings scattered about the enclosure. The ground was wet and soft. The rain came in chilling dashes. Old Grimshaw breasted the storm, and after half a mile's walk came to a hangar a good deal like the one he had left. There was a light inside.

"Hello, there!" he sang out in his big foghorn voice, thrusting the door open with his foot and getting under the shelter, and shaking the rain from his head and shoulders.

Two boys were the occupants of the place. They had a lamp on the table, upon which was outspread pictures and plans of airships. The older of the two got up from his chair with a pleasant smiling face.

"That's who it is," joined in the other boy cheerily. "Say, you're welcome, too. We were looking over some sketches of new machines, and you can tell us lots about them, you know."

"Got to get back to my own quarters," declared Grimshaw. "Some other time about those pictures. Boy brought a telegram to Mr. King's hangar. It's for you, Dashaway."

"For me?" inquired the lad who had first addressed the visitor.

"Yes. Here it is. Mr. King's away, but if you need me for anything let me know."

"I'm always needing you," replied Dave Dashaway. "I don't know what we'd do without you."

The young aviator—for such he was in fact and reality—took the proffered envelope. He tore open its end and read the enclosure rapidly.

"Any answer? Need me?" asked Grimshaw, moving towards the door....