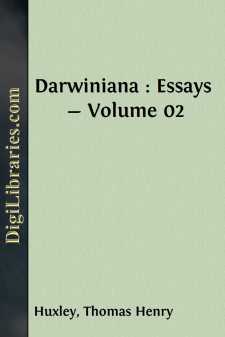 The hypothesis of which the present work of Mr. Darwin is but the preliminary outline, may be stated in his own language as follows:— "Species originated by means of natural selection, or through the preservation of the favoured races in the struggle for life." To render this thesis intelligible, it is necessary to interpret its terms. In the first place, what is a species? The question is a simple one, but the right answer to it is hard to find, even if we appeal to those who should know most about it. It is all those animals or plants which have descended from a single pair of parents; it is the smallest distinctly definable group of living organisms; it is an eternal and immutable entity; it is a mere abstraction of the human intellect having no existence in nature. Such are a few of the significations attached to this simple word which may be culled from authoritative sources; and if, leaving terms and theoretical subtleties aside, we turn to facts and endeavour to gather a meaning for ourselves, by studying the things to which, in practice, the name of species is applied, it profits us little. For practice varies as much as theory. Let two botanists or two zoologists examine and describe the productions of a country, and one will pretty certainly disagree with the other as to the number, limits, and definitions of the species into which he groups the very same things. In these islands, we are in the habit of regarding mankind as of one species, but a fortnight's steam will land us in a country where divines and savants, for once in agreement, vie with one another in loudness of assertion, if not in cogency of proof, that men are of different species; and, more particularly, that the species negro is so distinct from our own that the Ten Commandments have actually no reference to him. Even in the calm region of entomology, where, if anywhere in this sinful world, passion and prejudice should fail to stir the mind, one learned coleopterist will fill ten attractive volumes with descriptions of species of beetles, nine-tenths of which are immediately declared by his brother beetle-mongers to be no species at all.

The truth is that the number of distinguishable living creatures almost surpasses imagination. At least 100,000 such kinds of insects alone have been described and may be identified in collections, and the number of separable kinds of living things is under-estimated at half a million. Seeing that most of these obvious kinds have their accidental varieties, and that they often shade into others by imperceptible degrees, it may well be imagined that the task of distinguishing between what is permanent and what fleeting, what is a species and what a mere variety, is sufficiently formidable.

But is it not possible to apply a test whereby a true species may be known from a mere variety? Is there no criterion of species? Great authorities affirm that there is—that the unions of members of the same species are always fertile, while those of distinct species are either sterile, or their offspring, called hybrids, are so....