Darrel of the Blessed Isles 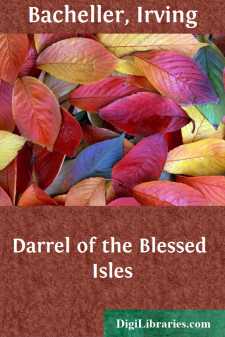 The Story of the Little Red Sleigh

It was in 1835, about mid-winter, when Brier Dale was a narrow clearing, and the horizon well up in the sky and to anywhere a day's journey.

Down by the shore of the pond, there, Allen built his house. To-day, under thickets of tansy, one may see the rotting logs, and there are hollyhocks and catnip in the old garden. He was from Middlebury, they say, and came west—he and his wife—in '29. From the top of the hill above Allen's, of a clear day, one could look far across the tree-tops, over distant settlements that were as blue patches in the green canopy of the forest, over hill and dale to the smoky chasm of the St. Lawrence thirty miles north. The Allens had not a child; they settled with no thought of school or neighbour. They brought a cow with them and a big collie whose back had been scarred by a lynx. He was good company and a brave hunter, this dog; and one day—it was February, four years after their coming, and the snow lay deep—he left the dale and not even a track behind him. Far and wide they went searching, but saw no sign of him. Near a month later, one night, past twelve o'clock, they heard his bark in the distance. Allen rose and lit a candle and opened the door. They could hear him plainer, and now, mingled with his barking, a faint tinkle of bells.

It had begun to thaw, and a cold rain was drumming on roof and window.

"He's crossing the pond," said Allen, as he listened. "He's dragging some heavy thing over the ice."

Soon he leaped in at the door, the little red sleigh bouncing after him. The dog was in shafts and harness. Over the sleigh was a tiny cover of sail-cloth shaped like that of a prairie schooner. Bouncing over the door-step had waked its traveller, and there was a loud voice of complaint in the little cavern of sail-cloth. Peering in, they saw only the long fur of a gray wolf. Beneath it a very small boy lay struggling with straps that held him down. Allen loosed them and took him out of the sleigh, a ragged but handsome youngster with red cheeks and blue eyes and light, curly hair. He was near four years of age then, but big and strong as any boy of five. He stood rubbing his eyes a minute, and the dog came over and licked his face, showing fondness acquired they knew not where. Mrs. Allen took the boy in her lap and petted him, but he was afraid—like a wild fawn that has just been captured—and broke away and took refuge under the bed. A long time she sat by her bedside with the candle, showing him trinkets and trying to coax him out. He ceased to cry when she held before him a big, shiny locket of silver, and soon his little hand came out to grasp it. Presently she began to reach his confidence with sugar. There was a moment of silence, then strange words came out of his hiding-place. "Anah jouhan" was all they could make of them, and they remembered always that odd combination of sounds. They gave him food, which he ate with eager haste. Then a moment of silence and an imperative call for more in some strange tongue....