Darkest India A Supplement to General Booth's "In Darkest England, and the Way Out" 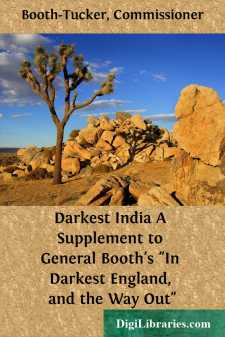 CHAPTER I. WHY "DARKEST INDIA?"

It is unnecessary for me to recapitulate the parallel drawn by General Booth between the sombre, impenetrable and never-ending forest, discovered by Stanley in the heart of Africa, and the more fearfully tangled mass of human corruption to be found in England. Neither the existence, nor the extent, of the latter have been called in question, and in reckoning the submerged at one tenth of the entire population it is generally admitted that their numbers have been understated rather than otherwise.

Supposing that a similar percentage be allowed for India, we are face to face with the awful fact that the "submerged tenth" consists of no less than twenty-six millions of human beings, who are in a state of destitution bordering upon absolute starvation! No less an authority than Sir William Hunter has estimated their numbers at fifty millions, and practically his testimony remains unimpeached.

Indeed I have heard it confidently stated by those who are in a good position to form a judgement, that at least one hundred millions of the population of India scarcely ever know from year's end to year's end what it is to have a satisfying meal, and that it is the rule and not the exception for them to retire to rest night after night hungry and faint for want of sufficient and suitable food.

I am not going, however to argue in favor of so enormous a percentage of destitution. I would rather believe, at any rate for the time being, that such an estimate is considerably exaggerated. Yet do what we will, it is impossible for any one who has lived in such close and constant contact with the poor, as we have been doing for the last eight or nine years, to blink the fact, that destitution of a most painful character exists, to a very serious extent, even when harvests are favorable and the country is not desolated by the scourge of famine.

Nor do I think that there would be much difficulty in proving that this submerged mass constitutes at least one-tenth of the entire population. No effort has hitherto been made to gauge their numbers, so that it is impossible to speak with accuracy, and the best that we can do is, to form the nearest feasible estimate from the various facts which lie to hand and which are universally admitted.

Let any one who is tempted to doubt the literal truth of what I say, or to think that the picture is overdrawn, but place himself at our disposal for a few days, or weeks, and we will undertake to show him, and that in districts which are as the very Paradise of India, thousands of cases of chronic destitution (especially at certain seasons in the year) such as ought to be sufficient to melt even a heart of stone!

CHAPTER II. WHO ARE NOT THE SUBMERGED TENTH?

Before passing on to consider of whom the destitute classes actually consist, it will be well in a country like India to make a few preliminary remarks regarding the numbers and position of their more fortunate countrymen who have employment of some sort, and are therefore excluded from the category....