Dark Lady of the Sonnets 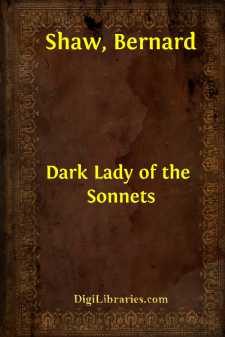 How the Play came to be Written

I had better explain why, in this little piece d'occasion, written for a performance in aid of the funds of the project for establishing a National Theatre as a memorial to Shakespear, I have identified the Dark Lady with Mistress Mary Fitton. First, let me say that I do not contend that the Dark Lady was Mary Fitton, because when the case in Mary's favor (or against her, if you please to consider that the Dark Lady was no better than she ought to have been) was complete, a portrait of Mary came to light and turned out to be that of a fair lady, not of a dark one. That settles the question, if the portrait is authentic, which I see no reason to doubt, and the lady's hair undyed, which is perhaps less certain. Shakespear rubbed in the lady's complexion in his sonnets mercilessly; for in his day black hair was as unpopular as red hair was in the early days of Queen Victoria. Any tinge lighter than raven black must be held fatal to the strongest claim to be the Dark Lady. And so, unless it can be shewn that Shakespear's sonnets exasperated Mary Fitton into dyeing her hair and getting painted in false colors, I must give up all pretence that my play is historical. The later suggestion of Mr Acheson that the Dark Lady, far from being a maid of honor, kept a tavern in Oxford and was the mother of Davenant the poet, is the one I should have adopted had I wished to be up to date. Why, then, did I introduce the Dark Lady as Mistress Fitton?

Well, I had two reasons. The play was not to have been written by me at all, but by Mrs Alfred Lyttelton; and it was she who suggested a scene of jealousy between Queen Elizabeth and the Dark Lady at the expense of the unfortunate Bard. Now this, if the Dark Lady was a maid of honor, was quite easy. If she were a tavern landlady, it would have strained all probability. So I stuck to Mary Fitton. But I had another and more personal reason. I was, in a manner, present at the birth of the Fitton theory. Its parent and I had become acquainted; and he used to consult me on obscure passages in the sonnets, on which, as far as I can remember, I never succeeded in throwing the faintest light, at a time when nobody else thought my opinion, on that or any other subject, of the slightest importance. I thought it would be friendly to immortalize him, as the silly literary saying is, much as Shakespear immortalized Mr W. H., as he said he would, simply by writing about him.

Let me tell the story formally.

Throughout the eighties at least, and probably for some years before, the British Museum reading room was used daily by a gentleman of such astonishing and crushing ugliness that no one who had once seen him could ever thereafter forget him. He was of fair complexion, rather golden red than sandy; aged between forty-five and sixty; and dressed in frock coat and tall hat of presentable but never new appearance. His figure was rectangular, waistless, neckless, ankleless, of middle height, looking shortish because, though he was not particularly stout, there was nothing slender about him....