Cursed by a Fortune 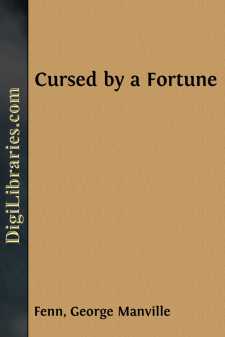 “Yes, James; this is my last dying speech and confession.”

“Be quiet, Kitty, and don’t make me so miserable. Dying is only going to sleep when a man’s tired out, as I am, with the worries of the world, money-making, fighting for one’s own, and disappointment. I know as well as old Jermingham that it’s pretty nearly all over. I’m sorry to leave you, darling, but I’m worn out, and your dear mother has been waiting for nearly a year.”

“Father, dearest father!” and two white arms clung round the neck of the dying man, as their owner sank upon her knees by the bedside.

“I’d stay for your sake, Kitty, but fate says no, and I’m so tired, darling, it will be like going into rest and peace. She always was an angel, Kitty, and she must be now; I feel as if I must see her afterwards. For I don’t think I’ve been such a very bad man, Will.”

“Thanks, James. I don’t want to play the Pharisee, but I have tried to be an honest man and a good father.”

“Your name stands highest in the city, and your charities—”

“Bother! I made plenty of money by the bank, and I gave some away, and I wish it had done more good. Well, my shares in the bank represent a hundred and fifty thousand; those are Kitty’s. There’s about ten thousand pounds in India stock and consols.”

“Must, Kitty, while I can. That money, Will, is yours for life, and after death it is for that boy of yours, Claud. He doesn’t deserve it, but perhaps he’ll be a better boy some day. Then there’s the lease of this house, my furniture, books, plate, pictures, and money in the private account. You will sell and realise everything; Kitty does not want a great gloomy house in Bedford Square—out of proceeds you will pay the servants’ legacies, and the expenses, there will be ample; and the residue is to be given to your wife for her use. That’s all. I have made you my sole executor, and I thought it better to send for you to tell you than for you to wait till the will was read. Give me a little of that stuff in some water, Kitty.”

His head was tenderly raised, and he drank and sank back with a sigh.

“Thank you, my darling. Now, Will, I might have joined John Garstang with you as executor, but I thought it better to give you full control, you being a quiet country squire, leading your simple, honest, gentleman-farmer’s life, while he is a keen speculative man.”

James Wilton, the banker’s brother, uttered something like a sigh, muttered a few words about trying to do his duty, and listened, as the dying man went on—

“I should not have felt satisfied. You two might have disagreed over some marriage business, for there is no other that you will have to control. And I said to myself that Will would not try to play the wicked uncle over my babe. So you are sole executor, with very little to do, for I have provided for everything, I think....