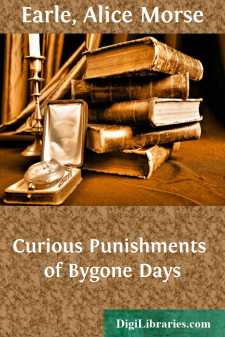 There is no doubt that our far-away grandfathers, whether of English, French, Dutch, Scotch or Irish blood, were much more afraid of ridicule than they were even of sinning, and far more than we are of extreme derision or mockery to-day. This fear and sensitiveness they showed in many ways. They were vastly touchy and resentful about being called opprobrious or bantering names; often running petulantly to the court about it and seeking redress by prosecution of the offender. And they were forever bringing suits in petty slander and libel cases. Colonial court-rooms “bubbled over with scandal and gossip and spite.” A creature as obsolete as his name, a “makebayt,” was ever-present in the community, ever whispering slander, ever exciting contention, and often also haled to court for punishment; while his opposite, a make-peace, was everywhere sadly needed. Far-seeing magistrates declared against the make-bait, as even guilty of stirring up barratry, or as Judge Sewall, the old Boston Puritan termed it, at least “gravaminous.”

Equally with personal libel did all good citizens and all good Christians fiercely resent of word, not only of derision or satire, but even of dispassionate disapproval of either government or church. A tithe of the plain-speaking criticism cheerfully endured in politics to-day would have provoked a civil war two centuries ago; while freedom of judgment or expression in religious matters was ever sharply silenced and punished in New England.

That ultra-sensitiveness which made a lampoon, a jeer, a scoff, a taunt, an unbearable and inflaming offence, was of equal force when used against the men of the day in punishment for real crimes and offenses.

In many—indeed, in nearly all—of the penalties and punishments of past centuries, derision, scoffing, contemptuous publicity and personal obloquy were applied to the offender or criminal by means of demeaning, degrading and helpless exposure in grotesque, insulting and painful “engines of punishment,” such as the stocks, bilboes, pillory, brank, ducking-stool or jougs. Thus confined and exposed to the free gibes and constant mocking of the whole community, the peculiar power of the punishment was accented. Kindred in their nature and in their force were the punishments of setting on the gallows and of branding; the latter, whether in permanent form by searing the flesh, or by mutilation; or temporarily, by labeling with written placards or affixed initials.

One of the earliest of these degrading engines of confinement for public exposure, to be used in punishment in this country, was the bilboes. Though this instrument to “punyssche transgressours ageynste ye Kinges Maiesties lawes” came from old England, it was by tradition derived from Bilboa. It is alleged that bilboes were manufactured there and shipped on board the Spanish Armada in large numbers to shackle the English prisoners so confidently expected to be captured. This occasion may have given them their wide popularity and employment; but this happened in 1588, and in the first volume of Hakluyt’s Voyages, page 295, dating some years earlier, reference is made to bilbous.

They were a simple but effective restraint; a long heavy bolt or bar of iron having two sliding shackles, something like handcuffs, and a lock....