Cupboard Love The Lady of the Barge and Others, Part 5. 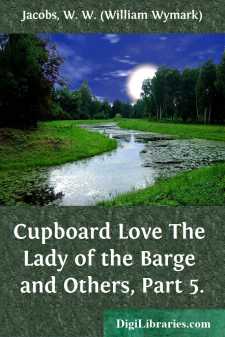 In the comfortable living-room at Negget's farm, half parlour and half kitchen, three people sat at tea in the waning light of a November afternoon. Conversation, which had been brisk, had languished somewhat, owing to Mrs. Negget glancing at frequent intervals toward the door, behind which she was convinced the servant was listening, and checking the finest periods and the most startling suggestions with a warning 'ssh!

"Go on, uncle," she said, after one of these interruptions.

"I forget where I was," said Mr. Martin Bodfish, shortly.

"Under our bed," Mr. Negget reminded him.

It was an odd place for an ex-policeman, especially as a small legacy added to his pension had considerably improved his social position, but Mr. Bodfish had himself suggested it in the professional hope that the person who had taken Mrs. Negget's gold brooch might try for further loot. He had, indeed, suggested baiting the dressing-table with the farmer's watch, an idea which Mr. Negget had promptly vetoed.

"I can't help thinking that Mrs. Pottle knows something about it," said Mrs. Negget, with an indignant glance at her husband.

"Mrs. Pottle," said the farmer, rising slowly and taking a seat on the oak settle built in the fireplace, "has been away from the village for near a fortnit."

"I didn't say she took it," snapped his wife. "I said I believe she knows something about it, and so I do. She's a horrid woman. Look at the way she encouraged her girl Looey to run after that young traveller from Smithson's. The whole fact of the matter is, it isn't your brooch, so you don't care."

"I know what you said," retorted his wife, sharply, "and I wish you'd be quiet and not interrupt uncle. Here's my uncle been in the police twenty-five years, and you won't let him put a word in edgeways.'

"My way o' looking at it," said the ex-policeman, slowly, "is different to that o' the law; my idea is, an' always has been, that everybody is guilty until they've proved their innocence."

"It's a wonderful thing to me," said Mr. Negget in a low voice to his pipe, "as they should come to a house with a retired policeman living in it. Looks to me like somebody that ain't got much respect for the police."

The ex-policeman got up from the table, and taking a seat on the settle opposite the speaker, slowly filled a long clay and took a spill from the fireplace. His pipe lit, he turned to his niece, and slowly bade her go over the account of her loss once more.

"I missed it this morning," said Mrs. Negget, rapidly, "at ten minutes past twelve o'clock by the clock, and half-past five by my watch which wants looking to. I'd just put the batch of bread into the oven, and gone upstairs and opened the box that stands on my drawers to get a lozenge, and I missed the brooch."

"Do you keep it in that box?" asked the ex-policeman, slowly.

"Always," replied his niece. "I at once came down stairs and told Emma that the brooch had been stolen....