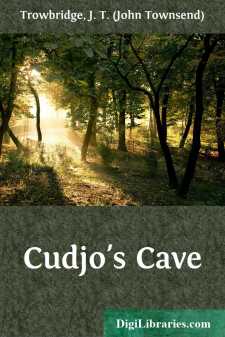 THE SCHOOLMASTER IN TROUBLE.

Carl crept stealthily up the bank, and, peering through the window, saw the master writing at his desk.

In his neat Quaker garb, his slender form bent over his task, his calm young face dimly seen in profile, there he sat. The room was growing dark; the glow of a March sunset was fading fast from the paper on which the swift pen traced these words:—

"Tennessee is getting too hot for me. My school is nearly broken up, and my farther stay here is becoming not only useless, but dangerous. There are many loyal men in the neighborhood, but they are overawed by the reckless violence of the secessionists. Mobs sanctioned by self-styled vigilance committees override all law and order. As I write, I can hear the yells of a drunken rabble before my school-house door. I am an especial object of hatred to them on account of my northern birth and principles. They have warned me to leave the state, they have threatened me with southern vengeance, but thus far I have escaped injury. How long this reign of terror is to last, or what is to be the end——"

A rap on the window drew the writer's attention, and, looking up, he saw, against the twilight sky, the broad German face of the boy Carl darkening the pane. He stepped to raise the sash.

The lad glanced quickly around, first over one shoulder, then the other, and said, in a hoarse whisper,—

"Was it you that rapped before?"

"I have rapped tree times, not loud, pecause I vas afraid the men would hear."

"What men are they?"

"The Wigilance Committee's men! They have some tar in a kettle. They have made a fire unter it, and I hear some of 'em say, 'Run, boys, and pring some fedders.'"

"Tar and feathers!" The young man grew pale. "They have threatened it, but they will not dare!"

"They vill dare do anything; but you shall prewent 'em! See vat I have prought you!" Carl opened his jacket, and showed the handle of a revolver. "Stackridge sent it."

"Hide it! hide it!" said the master, quickly. "He offered it to me himself. I told him I could not take it."

"He said, may be when you smell tar and see fedders, you vill change your mind," answered Carl.

The schoolmaster smiled. The pallor of fear which had surprised him for an instant, had vanished.

"I believe in a different creed from Mr. Stackridge's, honest man as he is. I shall not resist evil, but overcome evil with good, if I can; if I cannot, I shall suffer it."

"You show you vill shoot some of 'em, and they vill let you go," said Carl, not understanding the nobler doctrine. "Shooting vill do some of them willains some good!" his placid blue eyes kindling, as if he would like to do a little of the shooting. "You take it?"

"No," said the young man, firmly. "Such weapons are not for me."

"Wery vell!" Carl buttoned his jacket over the revolver. "Then you come mit me, if you please. Get out of the vinder and run. That is pest, I suppose."

"Then I vill go and pring help!" suddenly exclaimed, the boy; and away he scampered across the fields, leaving the young man alone in the darkening school-room....