Criticism on "The origin of species" 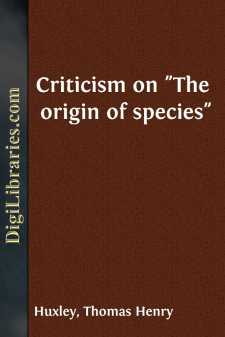 In the course of the present year several foreign commentaries upon Mr. Darwin's great work have made their appearance. Those who have perused that remarkable chapter of the 'Antiquity of Man,' in which Sir Charles Lyell draws a parallel between the development of species and that of languages, will be glad to hear that one of the most eminent philologers of Germany, Professor Schleicher, has, independently, published a most instructive and philosophical pamphlet (an excellent notice of which is to be found in the 'Reader', for February 27th of this year) supporting similar views with all the weight of his special knowledge and established authority as a linguist. Professor Haeckel, to whom Schleicher addresses himself, previously took occasion, in his splendid monograph on the 'Radiolaria' , to express his high appreciation of, and general concordance with, Mr. Darwin's views.

But the most elaborate criticisms of the 'Origin of Species' which have appeared are two works of very widely different merit, the one by Professor Kolliker, the well-known anatomist and histologist of Wurzburg; the other by M. Flourens, Perpetual Secretary of the French Academy of Sciences.

Professor Kolliker's critical essay 'Upon the Darwinian Theory' is, like all that proceeds from the pen of that thoughtful and accomplished writer, worthy of the most careful consideration. It comprises a brief but clear sketch of Darwin's views, followed by an enumeration of the leading difficulties in the way of their acceptance; difficulties which would appear to be insurmountable to Professor Kolliker, inasmuch as he proposes to replace Mr. Darwin's Theory by one which he terms the 'Theory of Heterogeneous Generation.' We shall proceed to consider first the destructive, and secondly, the constructive portion of the essay.

We regret to find ourselves compelled to dissent very widely from many of Professor Kolliker's remarks; and from none more thoroughly than from those in which he seeks to define what we may term the philosophical position of Darwinism.

"Darwin," says Professor Kolliker, "is, in the fullest sense of the word, a Teleologist. He says quite distinctly (First Edition, pp. 199, 200) that every particular in the structure of an animal has been created for its benefit, and he regards the whole series of animal forms only from this point of view."

"7. The teleological general conception adopted by Darwin is a mistaken one.

"Varieties arise irrespectively of the notion of purpose, or of utility, according to general laws of Nature, and may be either useful, or hurtful, or indifferent.

"The assumption that an organism exists only on account of some definite end in view, and represents something more than the incorporation of a general idea, or law, implies a one-sided conception of the universe. Assuredly, every organ has, and every organism fulfils, its end, but its purpose is not the condition of its existence. Every organism is also sufficiently perfect for the purpose it serves, and in that, at least, it is useless to seek for a cause of its improvement."

It is singular how differently one and the same book will impress different minds. That which struck the present writer most forcibly on his first perusal of the 'Origin of Species' was the conviction that Teleology, as commonly understood, had received its deathblow at Mr. Darwin's hands. For the teleological argument runs thus: an organ or organism (A) is precisely fitted to perform a function or purpose (B); therefore it was specially constructed to perform that function. In Paley's famous illustration, the adaptation of all the parts of the watch to the function, or purpose, of showing the time, is held to be evidence that the watch was specially contrived to that end; on the ground, that the only cause we know of, competent to produce such an effect as a watch which shall keep time, is a contriving intelligence adapting the means directly to that end....