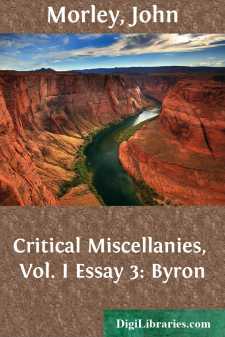 It is one of the singular facts in the history of literature, that the most rootedly conservative country in Europe should have produced the poet of the Revolution. Nowhere is the antipathy to principles and ideas so profound, nor the addiction to moderate compromise so inveterate, nor the reluctance to advance away from the past so unconquerable, as in England; and nowhere in England is there so settled an indisposition to regard any thought or sentiment except in the light of an existing social order, nor so firmly passive a hostility to generous aspirations, as in the aristocracy. Yet it was precisely an English aristocrat who became the favourite poet of all the most high-minded conspirators and socialists of continental Europe for half a century; of the best of those, that is to say, who have borne the most unsparing testimony against the present ordering of society, and against the theological and moral conceptions which have guided and maintained it. The rank and file of the army has been equally inspired by the same fiery and rebellious strains against the order of God and the order of man. 'The day will come,' wrote Mazzini, thirty years ago, 'when Democracy will remember all that it owes to Byron. England, too, will, I hope, one day remember the mission—so entirely English yet hitherto overlooked by her—which Byron fulfilled on the Continent; the European rôle given by him to English literature, and the appreciation and sympathy for England which he awakened amongst us. Before he came, all that was known of English literature was the French translation of Shakespeare, and the anathema hurled by Voltaire against the "drunken savage." It is since Byron that we Continentalists have learned to study Shakespeare and other English writers. From him dates the sympathy of all the true-hearted amongst us for this land of liberty, whose true vocation he so worthily represented among the oppressed. He led the genius of Britain on a pilgrimage throughout all Europe.'

The day of recollection has not yet come. It is only in his own country that Byron's influence has been a comparatively superficial one, and its scope and gist dimly and imperfectly caught, because it is only in England that the partisans of order hope to mitigate or avoid the facts of the Revolution by pretending not to see them, while the friends of progress suppose that all the fruits of change shall inevitably fall, if only they keep the forces and processes and extent of the change rigorously private and undeclared. That intense practicalness which seems to have done so many great things for us, and yet at the same moment mysteriously to have robbed us of all, forbids us even to cast a glance at what is no more than an aspiration. Englishmen like to be able to answer about the Revolution as those ancients answered about the symbol of another Revolution, when they said that they knew not so much as whether there were a Holy Ghost or not. The same want of kindling power in the national intelligence which made of the English Reformation one of the most sluggish and tedious chapters in our history, has made the still mightier advance of the moderns from the social system and spiritual bases of the old state, in spite of our two national achievements of punishing a king with death and emancipating our slaves, just as unimpressive and semi-efficacious a performance in this country, as the more affrontingly hollow and halt-footed transactions of the sixteenth century....