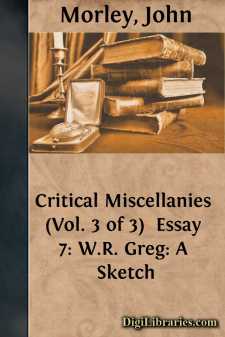 It is perhaps a little hard to undertake to write about the personality of a thinker whose ideas one does not share, and whose reading of the events and tendencies of our time was in most respects directly opposite to one's own. But literature is neutral ground. Character is more than opinion. Here we may forget the loud cries and sounding strokes, the watchwords and the tactics of the tented field, and fraternise with the adversary of the eve and the morrow in friendly curiosity and liberal recognition. It fell to the present writer at one time to have one or two bouts of public controversy with Mr. Greg. In these dialectics Mr. Greg was never vehement and never pressed, but he was inclined to be—or, at least, was felt by an opponent to be—dry, mordant, and almost harsh. These disagreeable prepossessions were instantly dissipated, as so often happens, by personal acquaintance. He had not only the courtesy of the good type of the man of the world, but an air of moral suavity, when one came near enough to him, that was infinitely attractive and engaging. He was urbane, essentially modest, and readily interested in ideas and subjects other than his own. There was in his manner and address something of what the French call liant. When the chances of residence made me his neighbour, an evening in his drawing-room, or half an hour's talk in casual meetings in afternoon walks on Wimbledon Common, was always a particularly agreeable incident. Some men and women have the quality of atmosphere. The egotism of the natural man is surrounded by an elastic medium. Mr. Greg was one of these personalities with an atmosphere elastic, stimulating, elevating, and yet composing. We do wrong to narrow our interests to those only of our contemporaries who figure with great lustre and éclat in the world. Some of the quiet characters away from the centre of great affairs are as well worth our attention as those who in high-heeled cothurnus stalk across the foreground.

Mr. Greg, it is not necessary to say, has a serious reputation in the literature of our time. In politics he was one of the best literary representatives of the fastidious or pedantocratic school of government. In economics he spoke the last word, and fell, sword in hand, in the last trench, of the party of capitalist supremacy and industrial tutelage. In the group of profound speculative questions that have come up for popular discussion since the great yawning rents and fissures have been made in the hypotheses of theology by the hypotheses of science, he set a deep mark on many minds. 'We are in the sick foggy dawn of a new era,' says one distinguished writer of our day, 'and no one saw more clearly than W. R. Greg what the day that would follow was likely to be.' To this I must humbly venture to demur; for there is no true vision of the fortunes of human society without Hope, and without Faith in the beneficent powers and processes of the Unseen Time. That and no other is the mood in which our sight is most likely to pierce the obscuring mists from which the new era begins to emerge. When we have said so much as this, it remains as true as before that Mr. Greg's faculty of disinterested speculation, his feeling for the problems of life, and his distinction of character, all make it worth while to put something about him on record, and to attempt to describe him as he was, apart from the opaque influences of passing controversy and of discussions that are rapidly losing their point.

Mr. Greg was born at Manchester in 1809. The family stock was Irish by residence and settlement, though Scotch in origin. The family name was half jocosely and half seriously believed to be the middle syllable of the famous clan of Macgregor. William Rathbone Greg's grandfather was a man of good position in the neighbourhood of Belfast, who sent two of his sons to push their fortunes in England. The younger of the two was adopted by an uncle, who carried on the business of a merchant at Manchester. He had no children of his own. The boy was sent to Harrow, where Dr. Samuel Parr was then an assistant master. When the post of head master became vacant, Parr, though only five-and-twenty, entered into a very vehement contest for the prize....