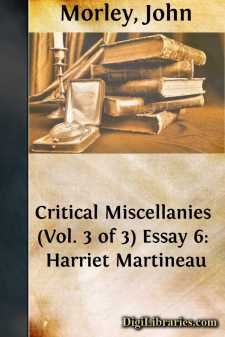 In 1850 Charlotte Brontë paid a visit to Harriet Martineau at Ambleside, and she wrote to her friends various emphatic accounts of her hostess. 'Without adopting her theories,' Miss Brontë said, 'I yet find a worth and greatness in herself, and a consistency, benevolence, perseverance in her practice, such as wins the sincerest esteem and affection. She is not a person to be judged by her writings alone, but rather by her own deeds and life, than which nothing can be more exemplary or noble.'

The division which Miss Brontë thus makes between opinions and character, and again between literary production and character, is at the root of any just criticism of the two volumes of autobiography which have just been given to the public. Of the third volume, The Memorials, by Mrs. Chapman, it is impossible to say anything serious. Mrs. Chapman fought an admirable fight in the dark times of American history for the abolition of slavery, but unhappily she is without literary gifts; and this third volume is one more illustration of the folly of entrusting the composition of biography to persons who have only the wholly irrelevant claim of intimate friendship, or kinship, or sympathy in public causes. The qualification for a biographer is not in the least that he is a virtuous person, or a second cousin, or a dear friend, or a trusty colleague; but that he knows how to write a book, has tact, style, taste, considerateness, sense of proportion, and a good eye for the beginnings and ends of things. The third volume, then, tells us little about the person to whom they relate. The two volumes of autobiography tell all that we can seek to know, and the reader who judges them in an equitable spirit will be ready to allow that, when all is said that can be said of her hardness, arbitrariness, and insularity, Harriet Martineau is still a singular and worthy figure among the conspicuous personages of a generation that has now almost vanished. Some will wonder how it was that her literary performances acquired so little of permanent value. Others will be pained by the distinct repudiation of all theology, avowed by her with a simple and courageous directness that can scarcely be counted other than honourable to her. But everybody will admit, as Charlotte Brontë did, that though her books are not of the first nor of the second rank, and though her anti-theological opinions are to many so repugnant, yet behind books and opinions was a remarkable personality, a sure eye for social realities, a moral courage that never flinched; a strong judgment within its limits; a vigorous self-reliance both in opinion and act, which yet did not prevent a habit of the most neutral self-judgment; the commonplace virtues of industry and energy devoted to aims too elevated, and too large and generous, to be commonplace; a splendid sincerity, a magnificent love of truth. And that all these fine qualities, which would mostly be described as manly, should exist not in a man but a woman, and in a woman who discharged admirably such feminine duties as fell to her, fills up the measure of our interest in such a character.

Harriet Martineau was born at Norwich in 1802, and she died, as we all remember, in the course of the summer of 1876. Few people have lived so long as three-quarters of a century, and undergone so little substantial change of character, amid some very important changes of opinion. Her family was Unitarian, and family life was in her case marked by some of that stiffness, that severity, that chilly rigour, with which Unitarians are sometimes taxed by religionists of a more ecstatic doctrine. Her childhood was very unhappy; the household seems to have been unamiable, and she was treated with none of that tenderness and sympathy for which firm and defiant natures are apt to yearn as strongly as others that get the credit of greater sensibility. With that singular impulse to suicide which is frequent among children, though rarer with girls than boys, she went one day into the kitchen for the carving-knife, that she might cut her throat; luckily the servants were at dinner, and the child retreated....