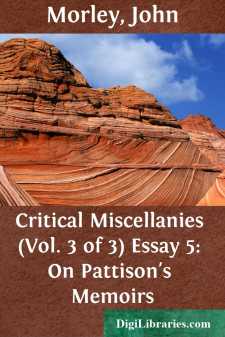 To reckon the subject of this volume among leading minds who have stamped a deep influence on our generation, is not possible even to the friendliest partiality. That was not his position, and nobody could be less likely than he would himself have been to claim it. Pattison started no new problem. His name is associated with no fertile speculation, and with no work of the first degree of importance. Nor was he any more intended for a practical leader than for an intellectual discoverer. He did not belong to the class of authoritative men who are born to give decisions from the chair. Measured by any standard commensurate to his remarkable faculties, Pattison's life would be generally regarded as pale, negative, and ineffectual. Nevertheless, it is undeniable that he had a certain singular quality about him that made his society more interesting, more piquant, and more sapid than that of many men of a far wider importance and more commanding achievement.

Critics have spoken of his learning, but the description is only relatively accurate. Of him, in this respect, we may say, what he said of Erasmus. 'Erasmus, though justly styled by Muretus, eruditus sane vir ac multæ lectionis, was not a learned man in the special sense of the word—not an érudit. He was the man of letters. He did not make a study a part of antiquity for its own sake, but used it as an instrument of culture.' The result of culture in Pattison's actual life was not by any means ideal. For instance, he was head of a college for nearly a quarter of a century, and except as a decorative figure-head with a high literary reputation, he did little more to advance the working interests of his college during these five-and-twenty years than if he had been one of the venerable academic abuses of the worst days before reform. But his temperament, his reading, his recoil from Catholicism, combined with the strong reflective powers bestowed upon him by nature, to produce a personality that was unlike other people, and infinitely more curious and salient than many who had a firmer grasp of the art of right living. In an age of effusion to be reserved, and in days of universal professions of sympathy to show a saturnine front, was to be an original. There was nobody in whose company one felt so much of the ineffable comfort of being quite safe against an attack of platitude. There was nobody on whom one might so surely count in the course of an hour's talk for some stroke of irony or pungent suggestion, or, at the worst, some significant, admonitory, and almost luminous manifestation of the great ars tacendi. In spite of his copious and ordered knowledge, Pattison could hardly be said to have an affluent mind. He did not impart intellectual direction like Mill, nor morally impress himself like George Eliot. Even in pithy humour he was inferior to Bagehot, who was certainly one of the most remarkable of the secondary figures of our generation....