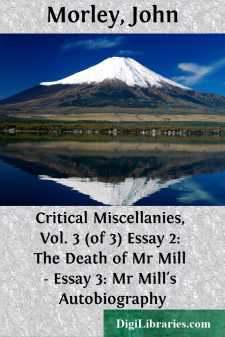 The tragic commonplaces of the grave sound a fuller note as we mourn for one of the greater among the servants of humanity. A strong and pure light is gone out, the radiance of a clear vision and a beneficent purpose. One of those high and most worthy spirits who arise from time to time to stir their generation with new mental impulses in the deeper things, has perished from among us. The death of one who did so much to impress on his contemporaries that physical law works independently of moral law, marks with profounder emphasis the ever ancient and ever fresh decree that there is one end to the just and the unjust, and that the same strait tomb awaits alike the poor dead whom nature or circumstance imprisoned in mean horizons, and those who saw far and felt passionately and put their reason to noble uses. Yet the fulness of our grief is softened by a certain greatness and solemnity in the event. The teachers of men are so few, the gift of intellectual fatherhood is so rare, it is surrounded by such singular gloriousness. The loss of a powerful and generous statesman, or of a great master in letters or art, touches us with many a vivid regret. The Teacher, the man who has talents and has virtues, and yet has a further something which is neither talent nor virtue, and which gives him the mysterious secret of drawing men after him, leaves a deeper sense of emptiness than this; but lamentation is at once soothed and elevated by a sense of sacredness in the occasion. Even those whom Mr. Mill honoured with his friendship, and who must always bear to his memory the affectionate veneration of sons, may yet feel their pain at the thought that they will see him no more, raised into a higher mood as they meditate on the loftiness of his task and the steadfastness and success with which he achieved it. If it is grievous to think that such richness of culture, such full maturity of wisdom, such passion for truth and justice, are now by a single stroke extinguished, at least we may find some not unworthy solace in the thought of the splendid purpose that they have served in keeping alive, and surrounding with new attractions, the difficult tradition of patient and accurate thinking in union with unselfish and magnanimous living.

Much will one day have to be said as to the precise value of Mr. Mill's philosophical principles, the more or less of his triumphs as a dialectician, his skill as a critic and an expositor. However this trial may go, we shall at any rate be sure that with his reputation will stand or fall the intellectual repute of a whole generation of his countrymen. The most eminent of those who are now so fast becoming the front line, as death mows down the veterans, all bear traces of his influence, whether they are avowed disciples or avowed opponents. If they did not accept his method of thinking, at least he determined the questions which they should think about. For twenty years no one at all open to serious intellectual impressions has left Oxford without having undergone the influence of Mr. Mill's teaching, though it would be too much to say that in that gray temple where they are ever burnishing new idols, his throne is still unshaken. The professorial chairs there and elsewhere are more and more being filled with men whose minds have been trained in his principles. The universities only typify his influence on the less learned part of the world. The better sort of journalists educated themselves on his books, and even the baser sort acquired a habit of quoting from them. He is the only writer in the world whose treatises on highly abstract subjects have been printed during his lifetime in editions for the people, and sold at the price of railway novels. Foreigners from all countries read his books as attentively as his most eager English disciples, and sought his opinion as to their own questions with as much reverence as if he had been a native oracle. An eminent American who came over on an official mission which brought him into contact with most of the leading statesmen throughout Europe, said to the present writer:—'The man who impressed me most of them all was Stuart Mill; you placed before him the facts on which you sought his opinion....