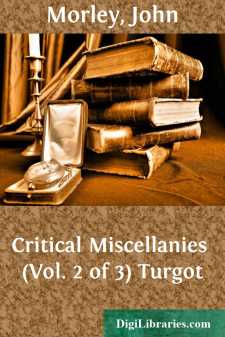 Anne-Robert-Jacques Turgot was born in Paris on the 10th of May 1727. He died in 1781. His life covered rather more than half a century, extending, if we may put it a little roughly, over the middle fifty years of the eighteenth century. This middle period marks the exact date of the decisive and immediate preparation for the Revolution. At its beginning neither the intellectual nor the social elements of the great disruption had distinctly appeared, or commenced their fermentation. At its close their work was completed, and we may count the months thence until the overthrow of every institution in France. It was between 1727 and 1781 that the true revolution took place. The events from '89 were only finishing strokes, the final explosion of a fabric under which every yard had been mined, by the long endeavour for half a century of an army of destroyers deliberate and involuntary, direct and oblique, such as the world has never at any other time beheld.

In 1727 Voltaire was returning from his exile in England, to open the long campaign, of which he was from that time forth to the close of his days the brilliant and indomitable captain. He died in 1778, bright, resolute, humane, energetic, to the last. Thus Turgot's life was almost exactly contemporary with the pregnant era of Voltaire's activity. In the same spring in which Turgot died, Maurepas too came to his end, and Necker was dismissed. The last event was the signal at which the floods of the deluge fairly began to rise, and the revolutionary tide to swell.

It will be observed, moreover, that Turgot was born half a generation after the first race of the speculative revolutionists. Rousseau, Diderot, Helvétius, Condillac, D'Alembert, as well as the foreign Hume, so much the greatest of the whole band of innovators, because penetrating so much nearer to the depths, all came into the world which they were to confuse so unspeakably, in the half dozen years between 1711 and 1717. Turgot was of later stock and comes midway between these fathers of the new church, between Hume, Rousseau, Diderot, and the generation of its fiery practical apostles, Condorcet, Mirabeau, Robespierre. The only other illustrious European of this decade was Adam Smith, who was born in 1723, and between whose labours and some of the most remarkable of Turgot's there was so much community. We cannot tell how far the gulf between Turgot and the earlier band was fixed by the accident that he did not belong to their generation in point of time. The accident is in itself only worth calling attention to, in connection with his distance from them in other and more important points than time.

The years of Turgot exactly bridge the interval between the ministry of the infamous Dubois and the ministry of the inglorious Calonne; between the despair and confusion of the close of the regency, and the despair and confusion of the last ten years of the monarchy. In 1727 we stand on the threshold of that far-resounding fiery workshop, where a hundred hands wrought the cunning implements and Cyclopean engines that were to serve in storming the hated citadels of superstition and injustice. In 1781 we emerge from these subterranean realms into the open air, to find ourselves surrounded by all the sounds and portents of imminent ruin. This, then, is the significance of the date of Turgot's birth.

His stock was Norman, and those who amuse themselves by finding a vital condition of the highest ability in antiquity of blood, may quote the descent of Turgot in support of their delusion. His biographers speak of one Togut, a Danish Prince, who walked the earth some thousand years before the Christian era; and of Saint Turgot in the eleventh century, the Prior of Durham, biographer of Bede, and first minister of Malcolm III. of Scotland. We shall do well not to linger in this too dark and frigid air. Let us pass over Togut and Saint Turgot; and the founder of a hospital in the thirteenth century; and the great-great-grandfather who sat as president of the Norman nobles in the States-General of 1614, and the grandfather who deserted arms for the toga....