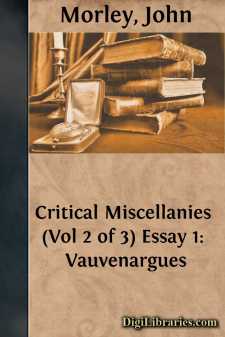 One of the most important phases of French thought in the great century of its illumination is only thoroughly intelligible, on condition that in studying it we keep constantly in mind the eloquence, force, and genius of Pascal. He was the greatest and most influential representative of that way of viewing human nature and its circumstances, which it was one of the characteristic glories of the eighteenth century to have rebelled against and rejected. More than a hundred years after the publication of the Pensées, Condorcet thought it worth while to prepare a new edition of them, with annotations, protesting, not without a certain unwonted deference of tone, against Pascal's doctrine of the base and desperate estate of man. Voltaire also had them reprinted with notes of his own, written in the same spirit of vivacious deprecation, which we may be sure would have been even more vivacious, if Voltaire had not remembered that he was speaking of the mightiest of all the enemies of the Jesuits. Apart from formal and specific dissents like these, all the writers who had drunk most deeply of the spirit of the eighteenth century, lived in a constant ferment of revolt against the clear-witted and vigorous thinker of the century before, who had clothed mere theological mysteries with the force and importance of strongly entrenched propositions in a consistent philosophy.

The resplendent fervour of Bossuet's declamations upon the nothingness of kings, the pitifulness of mortal aims, the crushing ever-ready grip of the hand of God upon the purpose and faculty of man, rather filled the mind with exaltation than really depressed or humiliated it. From Bossuet to Pascal is to pass from the solemn splendour of the church to the chill of the crypt. Besides, Bossuet's attitude was professional, in the first place, and it was purely theological, in the second; so the main stream of thought flowed away and aside from him. To Pascal it was felt necessary that there should be reply and vindication, whether in the shape of deliberate and published formulas, or in the reasoned convictions of the individual intelligence working privately. A syllabus of the radical articles of the French creed of the eighteenth century would consist largely of the contradictions of the main propositions of Pascal. The old theological idea of the fall was hard to endure, but the idea of the fall was clenched by such general laws of human nature as this,—that 'men are so necessarily mad, that it would be to be mad by a new form of madness not to be mad;'—that man is nothing but masquerading, lying, and hypocrisy, both in what concerns himself and in respect of others, wishing not to have the truth told to himself, and shrinking from telling it to anybody else; that the will, the imagination, the disorders of the body, the thousand concealed infirmities of the intelligence, conspire to reduce our discovery of justice and truth to a process of haphazard, in which we more often miss the mark than hit. Pleasure, ambition, industry, are only means of distracting men from the otherwise unavoidable contemplation of their own misery....