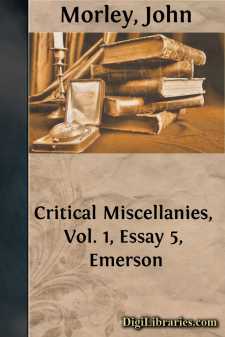 Ralph Waldo Emerson was born at Boston, May 25, 1803. He was of an ancient and honourable English stock, who had transplanted themselves, on one side from Cheshire and Bedfordshire, and on the other from Durham and York, a hundred and seventy years before. For seven or eight generations in a direct and unbroken line his forefathers had been preachers and divines, not without eminence in the Puritan tradition of New England. His second name came into the family with Rebecca Waldo, with whom at the end of the seventeenth century one Edward Emerson had intermarried, and whose family had fled from the Waldensian valleys and that slaughter of the saints which Milton called on Heaven to avenge. Every tributary, then, that made Emerson what he was, flowed not only from Protestantism, but from 'the Protestantism of the Protestant religion.' When we are told that Puritanism inexorably locked up the intelligence of its votaries in a dark and straitened chamber, it is worthy to be remembered that the genial, open, lucid, and most comprehensive mind of Emerson was the ripened product of a genealogical tree that at every stage of its growth had been vivified by Puritan sap.

Not many years after his birth, Emerson's mother was left a widow with narrow means, and he underwent the wholesome training of frugality in youth. When the time came, he was sent to Harvard. When Clough visited America a generation later, the collegiate training does not appear to have struck him very favourably. 'They learn French and history and German, and a great many more things than in England, but only imperfectly.' This was said from the standard of Rugby and Balliol, and the method that Clough calls imperfect had merits of its own. The pupil lost much in a curriculum that had a certain rawness about it, compared with the traditional culture that was at that moment (1820) just beginning to acquire a fresh hold within the old gray quadrangles of Oxford. On the other hand, the training at Harvard struck fewer of those superfluous roots in the mind, which are only planted that they may be presently cast out again with infinite distraction and waste.

When his schooling was over, Emerson began to prepare himself for the ministrations of the pulpit, and in 1826 and 1827 he preached in divers places. Two years later he was ordained, and undertook the charge of an important Unitarian Church in Boston. It was not very long before the strain of forms, comparatively moderate as it was in the Unitarian body, became too heavy to be borne. Emerson found that he could no longer accept the usual view of the Communion Service, even in its least sacramental interpretation. To him the rite was purely spiritual in origin and intent, and at the best only to be retained as a commemoration. The whole world, he said, had been full of idols and ordinances and forms, when 'the Almighty God was pleased to qualify and send forth a man to teach men that they must serve him with the heart; that only that life was religious which was thoroughly good; that sacrifice was smoke and forms were shadows. This man lived and died true to that purpose; and now with his blessed word and life before us, Christians must contend that it is a matter of vital importance, really a duty, to commemorate him by a certain form, whether that form be agreeable to their understandings or not. Is not this to make vain the gift of God? Is not this to make men forget that not forms but duties—not names but righteousness and love—are enjoined?'

He was willing to continue the service with that explanation, and on condition that he should not himself partake of the bread and wine. The congregation would fain have kept one whose transparent purity of soul had attached more than his heresy had alienated. But the innovation was too great, and Emerson resigned his charge (1832). For some five or six years longer he continued occasionally to preach, and more than one congregation would have accepted him. But doubts on the subject of public prayer began to weigh upon his mind. He suspected the practice by which one man offered up prayer vicariously and collectively for the assembled congregation. Was not that too, like the Communion Service, a form that tended to deaden the spirit?...