Creatures That Once Were Men 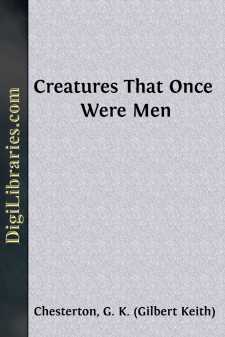 It is certainly a curious fact that so many of the voices of what is called our modern religion have come from countries which are not only simple, but may even be called barbaric. A nation like Norway has a great realistic drama without having ever had either a great classical drama or a great romantic drama. A nation like Russia makes us feel its modern fiction when we have never felt its ancient fiction. It has produced its Gissing without producing its Scott. Everything that is most sad and scientific, everything that is most grim and analytical, everything that can truly be called most modern, everything that can without unreasonableness be called most morbid, comes from these fresh and untried and unexhausted nationalities. Out of these infant peoples come the oldest voices of the earth. This contradiction, like many other contradictions, is one which ought first of all to be registered as a mere fact; long before we attempt to explain why things contradict themselves, we ought, if we are honest men and good critics, to register the preliminary truth that things do contradict themselves. In this case, as I say, there are many possible and suggestive explanations. It may be, to take an example, that our modern Europe is so exhausted that even the vigorous expression of that exhaustion is difficult for every one except the most robust. It may be that all the nations are tired; and it may be that only the boldest and breeziest are not too tired to say that they are tired. It may be that a man like Ibsen in Norway or a man like Gorky in Russia are the only people left who have so much faith that they can really believe in scepticism. It may be that they are the only people left who have so much animal spirits that they can really feast high and drink deep at the ancient banquet of pessimism. This is one of the possible hypotheses or explanations in the matter: that all Europe feels these things and that they only have strength to believe them also. Many other explanations might, however, also be offered. It might be suggested that half-barbaric countries like Russia or Norway, which have always lain, to say the least of it, on the extreme edge of the circle of our European civilisation, have a certain primal melancholy which belongs to them through all the ages. It is highly probable that this sadness, which to us is modern, is to them eternal. It is highly probable that what we have solemnly and suddenly discovered in scientific text-books and philosophical magazines they absorbed and experienced thousands of years ago, when they offered human sacrifice in black and cruel forests and cried to their gods in the dark. Their agnosticism is perhaps merely paganism; their paganism, as in old times, is merely devilworship. Certainly, Schopenhauer could hardly have written his hideous essay on women except in a country which had once been full of slavery and the service of fiends. It may be that these moderns are tricking us altogether, and are hiding in their current scientific jargon things that they knew before science or civilisation were. They say that they are determinists; but the truth is, probably, that they are still worshipping the Norns. They say that they describe scenes which are sickening and dehumanising in the name of art or in the name of truth; but it may be that they do it in the name of some deity indescribable, whom they propitiated with blood and terror before the beginning of history.

This hypothesis, like the hypothesis mentioned before it, is highly disputable, and is at best a suggestion. But there is one broad truth in the matter which may in any case be considered as established. A country like Russia has far more inherent capacity for producing revolution in revolutionists than any country of the type of England or America. Communities highly civilised and largely urban tend to a thing which is now called evolution, the most cautious and the most conservative of all social influences. The loyal Russian obeys the Czar because he remembers the Czar and the Czar's importance. The disloyal Russian frets against the Czar because he also remembers the Czar, and makes a note of the necessity of knifing him. But the loyal Englishman obeys the upper classes because he has forgotten that they are there. Their operation has become to him like daylight, or gravitation, or any of the forces of nature. And there are no disloyal Englishmen; there are no English revolutionists, because the oligarchic management of England is so complete as to be invisible. The thing which can once get itself forgotten can make itself omnipotent.

Gorky is pre-eminently Russian, in that he is a revolutionist; not because most Russians are revolutionists (for I imagine that they are not), but because most Russians—indeed, nearly all Russians—are in that attitude of mind which makes revolution possible and which makes religion possible, an attitude of primary and dogmatic assertion. To be a revolutionist it is first necessary to be a revelationist. It is necessary to believe in the sufficiency of some theory of the universe or the State. But in countries that have come under the influence of what is called the evolutionary idea, there has been no dramatic righting of wrongs, and (unless the evolutionary idea loses its hold) there never will be. These countries have no revolution, they have to put up with an inferior and largely fictitious thing which they call progress.

The interest of the Gorky tale, like the interest of so many other Russian masterpieces, consists in this sharp contact between a simplicity, which we in the West feel to be very old, and a rebelliousness which we in the West feel to be very new. We cannot in our graduated and polite civilisation quite make head or tail of the Russian anarch; we can only feel in a vague way that his tale is the tale of the Missing Link, and that his head is the head of the superman. We hear his lonely cry of anger. But we cannot be quite certain whether his protest is the protest of the first anarchist against government, or whether it is the protest of the last savage against civilisation. The cruelty of ages and of political cynicism or necessity has done much to burden the race of which Gorky writes; but time has left them one thing which it has not left to the people in Poplar or West Ham. It has left them, apparently, the clear and childlike power of seeing the cruelty which encompasses them. Gorky is a tramp, a man of the people, and also a critic and a bitter one....