Creative Chemistry Descriptive of Recent Achievements in the Chemical Industries 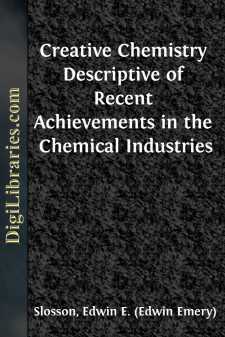 I THREE PERIODS OF PROGRESS

The story of Robinson Crusoe is an allegory of human history. Man is a castaway upon a desert planet, isolated from other inhabited worlds—if there be any such—by millions of miles of untraversable space. He is absolutely dependent upon his own exertions, for this world of his, as Wells says, has no imports except meteorites and no exports of any kind. Man has no wrecked ship from a former civilization to draw upon for tools and weapons, but must utilize as best he may such raw materials as he can find. In this conquest of nature by man there are three stages distinguishable:

These eras overlap, and the human race, or rather its vanguard, civilized man, may be passing into the third stage in one field of human endeavor while still lingering in the second or first in some other respect. But in any particular line this sequence is followed. The primitive man picks up whatever he can find available for his use. His successor in the next stage of culture shapes and develops this crude instrument until it becomes more suitable for his purpose. But in the course of time man often finds that he can make something new which is better than anything in nature or naturally produced. The savage discovers. The barbarian improves. The civilized man invents. The first finds. The second fashions. The third fabricates.

The primitive man was a troglodyte. He sought shelter in any cave or crevice that he could find. Later he dug it out to make it more roomy and piled up stones at the entrance to keep out the wild beasts. This artificial barricade, this false façade, was gradually extended and solidified until finally man could build a cave for himself anywhere in the open field from stones he quarried out of the hill. But man was not content with such materials and now puts up a building which may be composed of steel, brick, terra cotta, glass, concrete and plaster, none of which materials are to be found in nature.

The untutored savage might cross a stream astride a floating tree trunk. By and by it occurred to him to sit inside the log instead of on it, so he hollowed it out with fire or flint. Later, much later, he constructed an ocean liner.

Cain, or whoever it was first slew his brother man, made use of a stone or stick. Afterward it was found a better weapon could be made by tying the stone to the end of the stick, and as murder developed into a fine art the stick was converted into the bow and this into the catapult and finally into the cannon, while the stone was developed into the high explosive projectile. The first music to soothe the savage breast was the soughing of the wind through the trees. Then strings were stretched across a crevice for the wind to play upon and there was the Æolian harp. The second stage was entered when Hermes strung the tortoise shell and plucked it with his fingers and when Athena, raising the wind from her own lungs, forced it through a hollow reed. From these beginnings we have the organ and the orchestra, producing such sounds as nothing in nature can equal.

The first idol was doubtless a meteorite fallen from heaven or a fulgurite or concretion picked up from the sand, bearing some slight resemblance to a human being. Later man made gods in his own image, and so sculpture and painting grew until now the creations of futuristic art could be worshiped—if one wanted to—without violation of the second commandment, for they are not the likeness of anything that is in heaven above or that is in the earth beneath or that is in the water under the earth.

In the textile industry the same development is observable. The primitive man used the skins of animals he had slain to protect his own skin. In the course of time he—or more probably his wife, for it is to the women rather than to the men that we owe the early steps in the arts and sciences—fastened leaves together or pounded out bark to make garments. Later fibers were plucked from the sheepskin, the cocoon and the cotton-ball, twisted together and woven into cloth....