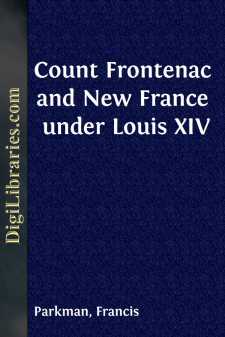 The events recounted in this book group themselves in the main about a single figure, that of Count Frontenac, the most remarkable man who ever represented the crown of France in the New World. From strangely unpromising beginnings, he grew with every emergency, and rose equal to every crisis. His whole career was one of conflict, sometimes petty and personal, sometimes of momentous consequence, involving the question of national ascendancy on this continent. Now that this question is put at rest for ever, it is hard to conceive, the anxiety which it wakened in our forefathers. But for one rooted error of French policy, the future of the English-speaking races in America would have been more than endangered.

Under the rule of Frontenac occurred the first serious collision of the rival powers, and the opening of the grand scheme of military occupation by which France strove to envelop and hold in check the industrial populations of the English colonies. It was he who made that scheme possible.

In "The Old Regime in Canada," I tried to show from what inherent causes this wilderness empire of the Great Monarch fell at last before a foe, superior indeed in numbers, but lacking all the forces that belong to a system of civil and military centralization. The present volume will show how valiantly, and for a time how successfully, New France battled against a fate which her own organic fault made inevitable. Her history is a great and significant drama, enacted among untamed forests, with a distant gleam of courtly splendors and the regal pomp of Versailles.

The authorities on which the book rests are drawn chiefly from the manuscript collections of the French government in the Archives Nationales, the Bibliotheque Nationale, and, above all, the vast repositories of the Archives of the Marine and Colonies. Others are from Canadian and American sources. I have, besides, availed myself of the collection of French, English, and Dutch documents published by the State of New York, under the excellent editorship of Dr. O'Callaghan, and of the manuscript collections made in France by the governments of Canada and of Massachusetts. A considerable number of books, contemporary or nearly so with the events described, also help to throw light upon them; and these have all been examined. The citations in the margins represent but a small part of the authorities consulted.

This mass of material has been studied with extreme care, and peculiar pains have been taken to secure accuracy of statement. In the preface of "The Old Regime," I wrote: "Some of the results here reached are of a character which I regret, since they cannot be agreeable to persons for whom I have a very cordial regard. The conclusions drawn from the facts may be matter of opinion: but it will be remembered that the facts themselves can be overthrown only by overthrowing the evidence on which they rest, or bringing forward counter-evidence of equal or greater strength; and neither task will be found an easy one."

The invitation implied in these words has not been accepted....