Cormorant Crag A Tale of the Smuggling Days 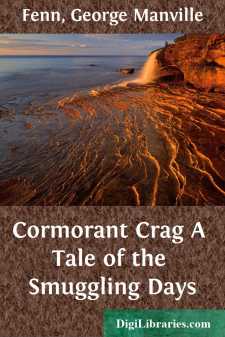 A Home at Sea.

“Here, you, Vince!” cried Doctor Burnet, pausing in his surgery with a bottle in each hand—one large and the other small, the latter about to be filled for the benefit of a patient who believed himself to be very ill and felt aggrieved when his medical adviser told him that he would be quite well if he did not eat so much.

The boy walked up to the surgery door at the end of the long, low granite house.

“Upon my word!” cried the Doctor; “it’s lucky we have nobody here to see you. No one would ever take you for a gentleman’s son.”

“Why not, sir! Look at your trousers and your boots.”

Vincent Burnet looked down, and then up in his father’s face.

“Trousers a bit tight across the knee,” he said deprecatingly. “The cloth gave way.”

“And were your boots too tight at the toes, sir? Look at them.”

“They always wear out there,” said Vincent; and he once more looked down, beyond the great tear across the right knee of his trousers, to his boots, whose toes seemed each to have developed a wide mouth, within which appeared something which looked like a great grey tongue.

“I don’t think this pair were very good leather, father,” he said apologetically.

“Good leather, sir! You’d wear them out it they were cast iron.—Ah, my dear!”

A pleasant, soft face appeared at the door, and looked anxiously from father to son.

“Is anything the matter, Robert?”

“Matter? Look at this fellow’s clothes and boots!”

“Oh, Vince, my dear, how you have torn your trousers again!”

“Torn them again!—the boy’s a regular scarecrow!” cried the Doctor. “I will not pay for good things for him to go cliff-climbing and wading and burrowing in caves.—Here: what are you going to do?”

“Take him indoors to sew up that slit.”

“No!” cried the Doctor, filling up the bottle; and then, making a small cork squeak as he screwed it in, “Take your scissors and cut the legs off four inches above the knees.”

“Robert!” cried Mrs Burnet, in a tone of protest.

“And look here, Vince: you can give up wearing shoes and stockings; they are for civilised beings, not for young savages.”

“My dear Robert, you are not in earnest?”

“Ah, but I am. Let him chip and tear his skin: that will grow up again: clothes will not.”

“All right, father; I shan’t mind,” said the boy, smiling. “Save taking shoes and stockings off for wading.”

“Vincent, my dear!” cried his mother, “how absurd! You would look nice the next time Michael Ladelle came for you.”

“He’d do the same, mother. He always imitates me.”

“You’re too hard upon them, Robert,” said Mrs Burnet, laying her arm on her son’s shoulder. “It does not matter out in this wild place, where there is no one to see him but the fishing people; and see what a healthy, natural life it is for them.”