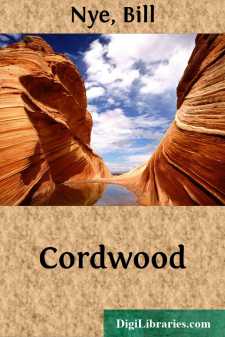 No one can go through the wide territory of Montana to-day without being strongly impressed with the wonderful growth of the great cattle growing and grazing industry of that territory. And yet Montana is but the northern extremity of the great grazing belt which lies at the foot of the Rocky Mountains, extending from the British possessions on the north to the Mexican border on the south, extending eastward, too, as far as the arable lands of Dakota, Nebraska and Kansas.

Montana, at this season of the year, is the paradise of the sleek, high-headed, 2-year-old Texan steer, with his tail over the dashboard, as well as the stock yearling, born on the range, beneath the glorious mountain sky and under the auspices of roundup No. 21.

I do not say this to advertise the stock growing business, because it is already advertised too much, anyway. So many millionaires have been made with "free grass" and the early-rising, automatic branding iron that every man in the United States who has a cow that can stand the journey seems to be about to take her west and embark in business as a cattle king.

But let me warn the amateur cow man that in the great grazing regions it takes a good many acres of thin grass to maintain the adult steer in affluence for twelve months, and the great pastures at the base of the mountains are being pretty well tested. Moreover, I believe that these great conventions of cattlemen, where free grass and easily acquired fortunes are naturally advertised, will tend to overstock the ranges at last and founder the goose that now lays the golden egg. This, of course, is really none of my business, but if I didn't now and then refer to matters that do not concern me I would be regarded as reticent.

My intention, however, in approaching the great cow industry, which, by the way, is anything but an industry, being in fact more like the seductive manner whereby a promissory note acquires 2 per cent. per month without even stopping to spit on its hands, was to refer incidentally to the proposition of an English friend of mine. This friend, seeing at once the great magnitude of the cow industry and the necessity for more and more cowboys, has suggested the idea of establishing a cowboys' college, or training school, for self-made young men who desire to become accomplished. The average Englishman will most always think of something that nobody else would naturally think of. Now, our cattleman would have gone on for years with his great steer emporium without thinking of establishing an institution where a poor boy might go and learn to rope a 4-year-old in such a way as to throw him on his stomach with a sickening thud.

The young Maverick savant could take a kindergarten course in the study of cow brands. Here a wide field opens up to the scholar. The adult steer in the great realm of beef is now a walking Chinese wash bill, a Hindoo poem in the original junk shop alphabet, a four-legged Greek inscription, punctuated with jim-jams, a stenographer's notes of a riot, a bird's-eye view of a premature explosion in a hardware store.

The cowboy who can at once grapple with the great problem of where to put the steer with "B bar B" on left shoulder, "Key circle G" on left side, "Heart D Heart" on right hip, left ear crop, wattle te wattle, and seven hands round with "Dash B Dash" on right shoulder "vented," wattle on dew lap vented, and "P. D. Q.," "C. O. D.," and "N. G." vented on right side, keeping track of transfers, range and post-office of last owner, has certainly got a future, which lies mostly ahead of him.

But now that the idea has been turned loose, I shall look forward to the time when wealthy men who have been in the habit of dying and leaving their money to other institutions, will meet with a change of heart, and begin to endow the cowboys' college, and the Maverick hotbed of broncho sciences....