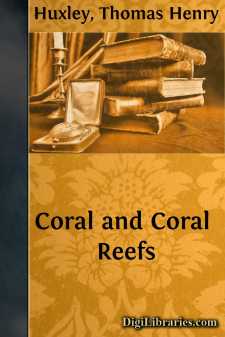 THE subject upon which I wish to address you to-night is the structure and origin of Coral and Coral Reefs. Under the head of "coral" there are included two very different things; one of them is that substance which I imagine a great number of us have champed when we were very much younger than we are now,—the common red coral, which is used so much, as you know, for the edification and the delectation of children of tender years, and is also employed for the purposes of ornament for those who are much older, and as some think might know better. The other kind of coral is a very different substance; it may for distinction's sake be called the white coral; it is a material which most assuredly not the hardest-hearted of baby farmers would give to a baby to chew, and it is a substance which is to be seen only in the cabinets of curious persons, or in museums, or, may be, over the mantelpieces of sea-faring men. But although the red coral, as I have mentioned to you, has access to the very best society; and although the white coral is comparatively a despised product, yet in this, as in many other cases, the humbler thing is in reality the greater; the amount of work which is done in the world by the white coral being absolutely infinite compared with that effected by its delicate and pampered namesake. Each of these substances, the white coral and the red, however, has a relationship to the other. They are, in a zoological sense, cousins, each of them being formed by the same kind of animals in what is substantially the same way. Each of these bodies is, in fact, the hard skeleton of a very curious and a very simple animal, more comparable to the bones of such animals as ourselves than to the shells of oysters or creatures of that kind; for it is the hardening of the internal tissue of the creature, of its internal substance, by the deposit in the body of a material which is exceedingly common, not only in fresh but in sea water, and which is specially abundant in those waters which we know as "hard," those waters, for example, which leave a "fur" upon the bottom of a tea-kettle. This "fur" is carbonate of lime, the same sort of substance as limestone and chalk. That material is contained in solution in sea water, and it is out of the sea water in which these coral creatures live that they get the lime which is needed for the forming of their hard skeleton.

But now what manner of creatures are these which form these hard skeletons? I dare say that in these days of keeping aquaria, of locomotion to the sea-side, most of those whom I am addressing may have seen one of those creatures which used to be known as the "sea anemone," receiving that name on account of its general resemblance, in a rough sort of way, to the flower which is known as the "anemone"; but being a thing which lives in the sea, it was qualified as the "sea anemone." Well, then, you must suppose a body shaped like a short cylinder, the top cut off, and in the top a hole rather oval than round. All round this aperture, which is the mouth, imagine that there are placed a number of feelers forming a circle. The cavity of the mouth leads into a sort of stomach, which is very unlike those of the higher animals, in the circumstance that it opens at the lower end into a cavity of the body, and all the digested matter, converted into nourishment, is thus distributed through the rest of the body. That is the general structure of one of these sea anemones. If you touch it it contracts immediately into a heap. It looks at first quite like a flower in the sea, but if you touch it you find that it exhibits all the peculiarities of a living animal; and if anything which can serve as its prey comes near its tentacles, it closes them round it and sucks the material into its stomach and there digests it and turns it to the account of its own body.

These creatures are very voracious, and not at all particular what they seize; and sometimes it may be that they lay hold of a shellfish which is far too big to be packed into that interior cavity, and, of course, in any ordinary animal a proceeding of this kind would give rise to a very severe fit of indigestion. But this is by no means the case in the sea anemone, because when digestive difficulties of this kind arise he gets out of them by splitting himself in two; and then each half builds itself up into a fresh creature, and you have two polypes where there was previously one, and the bone which stuck in the way lying between them! Not only can these creatures multiply in this fashion, but they can multiply by buds. A bud will grow out of the side of the body (I am not speaking of the common sea anemone, but of allied creatures) just like the bud of a plant, and that will fashion itself into a creature just like the parent. There are some of them in which these buds remain connected together, and you will soon see what would be the result of that. If I make a bud grow out here, and another on the opposite side, and each fashions itself into a new polype, the practical effect will be that before long you will see a single polype converted into a sort of tree or bush of polypes. And these will all remain associated together, like a kind of co-operative store, which is a thing I believe you understand very well here,—each mouth will help to feed the body and each part of the body help to support the multifarious mouths....