Conversations on Chemistry, V. 1-2 In Which the Elements of that Science Are Familiarly Explained and Illustrated by Experiments 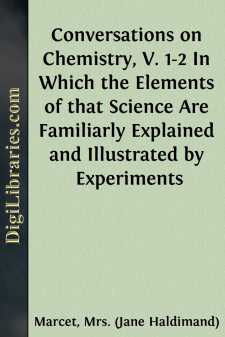 In venturing to offer to the public, and more particularly to the female sex, an Introduction to Chemistry, the author, herself a woman, conceives that some explanation may be required; and she feels it the more necessary to apologise for the present undertaking, as her knowledge of the subject is but recent, and as she can have no real claims to the title of chemist.

On attending for the first time experimental lectures, the author found it almost impossible to derive any clear or satisfactory information from the rapid demonstrations which are usually, and perhaps necessarily, crowded into popular courses of this kind. But frequent opportunities having afterwards occurred of conversing with a friend on the subject of chemistry, and of repeating a variety of experiments, she became better acquainted with the principles of that science, and began to feel highly interested in its pursuit. It was then that she perceived, in attending the excellent lectures delivered at the Royal Institution, by the present Professor of Chemistry, the great advantage which her previous knowledge of the subject, slight as it was, gave her over others who had not enjoyed the same means of private instruction. Every fact or experiment attracted her attention, and served to explain some theory to which she was not a total stranger; and she had the gratification to find that the numerous and elegant illustrations, for which that school is so much distinguished, seldom failed to produce on her mind the effect for which they were intended.

Hence it was natural to infer, that familiar conversation was, in studies of this kind, a most useful auxiliary source of information; and more especially to the female sex, whose education is seldom calculated to prepare their minds for abstract ideas, or scientific language.

As, however, there are but few women who have access to this mode of instruction; and as the author was not acquainted with any book that could prove a substitute for it, she thought that it might be useful for beginners, as well as satisfactory to herself, to trace the steps by which she had acquired her little stock of chemical knowledge, and to record, in the form of dialogue, those ideas which she had first derived from conversation.

But to do this with sufficient method, and to fix upon a mode of arrangement, was an object of some difficulty. After much hesitation, and a degree of embarrassment, which, probably, the most competent chemical writers have often felt in common with the most superficial, a mode of division was adopted, which, though the most natural, does not always admit of being strictly pursued—it is that of treating first of the simplest bodies, and then gradually rising to the most intricate compounds.

It is not the author’s intention to enter into a minute vindication of this plan. But whatever may be its advantages or inconveniences, the method adopted in this work is such, that a young pupil, who should occasionally recur to it, with a view to procure information on particular subjects, might often find it obscure or unintelligible; for its various parts are so connected with each other as to form an uninterrupted chain of facts and reasonings, which will appear sufficiently clear and consistent to those only who may have patience to go through the whole work, or have previously devoted some attention to the subject....