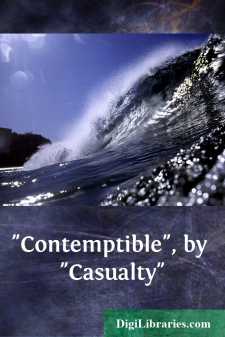 No cheers, no handkerchiefs, no bands. Nothing that even suggested the time-honoured scene of soldiers leaving home to fight the Empire's battles. Parade was at midnight. Except for the lighted windows of the barracks, and the rush of hurrying feet, all was dark and quiet. It was more like ordinary night operations than the dramatic departure of a Unit of the First British Expeditionary Force to France.

As the Battalion swung into the road, the Subaltern could not help thinking that this was indeed a queer send-off. A few sergeants' wives, standing at the corner of the Parade ground, were saying good-bye to their friends as they passed. "Good-bye, Bill;" "Good luck, Sam!" Not a hint of emotion in their voices. One might have thought that husbands and fathers went away to risk their lives in war every day of the week. And if the men were at all moved at leaving what had served for their home, they hid it remarkably well. Songs were soon breaking out from all parts of the column of route. As the Club House, and then the Golf Club, stole silently up and disappeared behind him, the Subaltern wondered whether he would ever see them again. But he refused to let his thoughts drift in this channel. Meanwhile, the weight of the mobilisation kit was almost intolerable.

In an hour the station was reached. An engine was shunting up and down, piecing the troop trains together, and in twenty minutes the Battalion was shuffling down the platform, the empty trains on either side. Two companies were to go to each train, twelve men to a third-class compartment, N.C.O.s second class, Officers first. As soon as the men were in their seats, the Subaltern made his way to the seat he had "bagged," and prepared to go to sleep. Another fellow pushed his head through the window and wondered what had become of the regimental transport. Somebody else said he didn't know or care; his valise was always lost, he said; they always made a point of it.

Soon after, they were all asleep, and the train pulled slowly out of the station.

When the Subaltern awoke it was early morning, and they were moving through Hampshire fields at a rather sober pace. He was assailed with a poignant feeling of annoyance and resentment that this war should be forced upon them. England looked so good in the morning sunshine, and the comforts of English civilisation were so hard to leave. The sinister uncertainty of the Future brooded over them like a thunder cloud.

Isolated houses thickened into clusters, streets sprang up, and soon they were in Southampton.

The train pulled up at the Embarkation Station, quite close to the wharf to which some half-dozen steamers were moored. There was little or no delay. The Battalion fell straight into "massed formation," and began immediately to move on to one of the ships. The Colonel stood by the gangway talking to an Embarkation Officer. Everything was in perfect readiness, and the Subaltern was soon able to secure a berth.

There was plenty of excitement on deck while the horses of the regimental transport were being shipped into the hold....