Conspiracy of Catiline and the Jurgurthine War 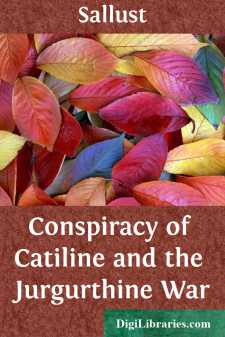 The Introduction, I.-IV. The character of Catiline, V. Virtues of the ancient Romans, VI.-IX. Degeneracy of their posterity, X.-XIII. Catiline's associates and supporters, and the arts by which he collected them, XIV. His crimes and wretchedness, XV. His tuition of his accomplices, and resolution to subvert the government, XVI. His convocation of the conspirators, and their names, XVII. His concern in a former conspiracy, XVIII., XIX. Speech to the conspirators, XX. His promises to them, XXI. His supposed ceremony to unite them, XXII. His designs discovered by Fulvia, XXIII. His alarm on the election of Cicero to the consulship, and his design in engaging women in his cause, XXIV. His accomplice, Sempronia, characterized, XXV. His ambition of the consulship, his plot to assassinate Cicero, and his disappointment in both, XXVI. His mission of Manlius into Etruria, and his second convention of the conspirators, XXVII. His second attempt to kill Cicero; his directions to Manlius well observed, XXVIII. His machinations induce the Senate to confer extraordinary power on the consuls, XXIX. His proceedings are opposed by various precautions, XXX. His effrontery in the Senate, XXXI. He sets out for Etruria, XXXII. His accomplice, Manlius, sends a deputation to Marcius, XXXIII. His representations to various respectable characters, XXXIV. His letter to Catulus, XXXV. His arrival at Manlius's camp; he is declared an enemy by the Senate; his adherents continue faithful and resolute, XXXVI. The discontent and disaffection of the populace in Rome, XXXVII. The old contentions between the patricians and plebeians, XXXVIII. The effect which a victory of Catiline would have produced, XXXIX. The Allobroges are solicited to engage in the conspiracy, XL. They discover it to Cicero, XLI. The incaution of Catiline's accomplices in Gaul and Italy, XLII. The plans of his adherents at Rome, XLIII. The Allobroges succeed in obtaining proofs of the conspirators' guilt, XLIV. The Allobroges and Volturcius are arrested by the contrivance of Cicero, XLV. The principal conspirators at Rome are brought before the Senate, XLVI. The evidence against them, and their consignment to custody, XLVII. The alteration in the minds of the populace, and the suspicions entertained against Crassus, XLVIII. The attempts of Catulus and Piso to criminate Caesar, XLIX. The plans of Lentulus and Cethegus for their rescue, and the deliberations of the Senate, L. The speech of Caesar on the mode of punishing the conspirators, LI. The speech of Cato on the same subject, LII. The condemnation of the prisoners; the causes of Roman greatness, LIII. Parallel between Caesar and Cato, LIV. The execution of the criminals, LV. Catiline's warlike preparations in Etruria, LVI. He is compelled by Metullus and Antonius to hazard an action, LVII. His exhortation to his men, LVIII. His arrangements, and those of his opponents, for the battle, LIX. His bravery, defeat, and death, LX., LXI.

I. It becomes all men, who desire to excel other animals,[1] to strive, to the utmost of their power,[2] not to pass through life in obscurity, [3] like the beasts of the field,[4] which nature has formed groveling[5] and subservient to appetite....