Conjuror's House A Romance of the Free Forest 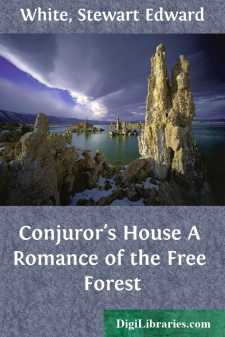 The girl stood on a bank above a river flowing north. At her back crouched a dozen clean whitewashed buildings. Before her in interminable journey, day after day, league on league into remoteness, stretched the stern Northern wilderness, untrodden save by the trappers, the Indians, and the beasts. Close about the little settlement crept the balsams and spruce, the birch and poplar, behind which lurked vast dreary muskegs, a chaos of bowlder-splits, the forest. The girl had known nothing different for many years. Once a summer the sailing ship from England felt its frozen way through the Hudson Straits, down the Hudson Bay, to drop anchor in the mighty River of the Moose. Once a summer a six-fathom canoe manned by a dozen paddles struggled down the waters of the broken AbГѓ­tibi. Once a year a little band of red-sashed voyageurs forced their exhausted sledge-dogs across the ice from some unseen wilderness trail. That was all.

Before her eyes the seasons changed, all grim, but one by the very pathos of brevity sad. In the brief luxuriant summer came the Indians to trade their pelts, came the keepers of the winter posts to rest, came the ship from England bringing the articles of use or ornament she had ordered a full year before. Within a short time all were gone, into the wilderness, into the great unknown world. The snow fell; the river and the bay froze. Strange men from the North glided silently to the Factor's door, bearing the meat and pelts of the seal. Bitter iron cold shackled the northland, the abode of desolation. Armies of caribou drifted by, ghostly under the aurora, moose, lordly and scornful, stalked majestically along the shore; wolves howled invisible, or trotted dog-like in organized packs along the river banks. Day and night the ice artillery thundered. Night and day the fireplaces roared defiance to a frost they could not subdue, while the people of desolation crouched beneath the tyranny of winter.

Then the upheaval of spring with the ice-jams and terrors, the Moose roaring by untamable, the torrents rising, rising foot by foot to the very dooryard of her father's house. Strange spirits were abroad at night, howling, shrieking, cracking and groaning in voices of ice and flood. Her Indian nurse told her of them all—of Maunabosho, the good; of Nenaubosho the evil—in her lisping Ojibway dialect that sounded like the softer voices of the forest.

At last the sudden subsidence of the waters; the splendid eager blossoming of the land into new leaves, lush grasses, an abandon of sweetbrier and hepatica. The air blew soft, a thousand singing birds sprang from the soil, the wild goose cried in triumph. Overhead shone the hot sun of the Northern summer.

From the wilderness came the brigades bearing their pelts, the hardy traders of the winter posts, striking hot the imagination through the mysterious and lonely allurement of their callings. For a brief season, transient as the flash of a loon's wing on the shadow of a lake, the post was bright with the thronging of many people....