Conditions of Existence as Affecting the Perpetuation of Living Beings 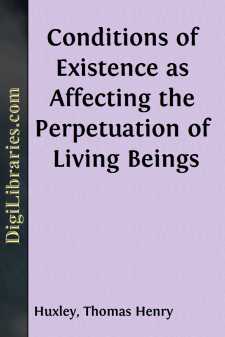 IN the last Lecture I endeavoured to prove to you that, while, as a general rule, organic beings tend to reproduce their kind, there is in them, also, a constantly recurring tendency to vary—to vary to a greater or to a less extent. Such a variety, I pointed out to you, might arise from causes which we do not understand; we therefore called it spontaneous; and it might come into existence as a definite and marked thing, without any gradations between itself and the form which preceded it. I further pointed out, that such a variety having once arisen, might be perpetuated to some extent, and indeed to a very marked extent, without any direct interference, or without any exercise of that process which we called selection. And then I stated further, that by such selection, when exercised artificially—if you took care to breed only from those forms which presented the same peculiarities of any variety which had arisen in this manner—the variation might be perpetuated, as far as we can see, indefinitely.

In the first place, as regards structural characteristics, I endeavoured to show you, by the skeletons which I had upon the table, and by reference to a great many well-ascertained facts, that the different breeds of Pigeons, the Carriers, Pouters, and Tumblers, might vary in any of their internal and important structural characters to a very great degree; not only might there be changes in the proportions of the skull, and the characters of the feet and beaks, and so on; but that there might be an absolute difference in the number of the vertebrae of the back, as in the sacral vertebrae of the Pouter; and so great is the extent of the variation in these and similar characters that I pointed out to you, by reference to the skeletons and the diagrams, that these extreme varieties may absolutely differ more from one another in their structural characters than do what naturalists call distinct SPECIES of pigeons; that is to say, that they differ so much in structure that there is a greater difference between the Pouter and the Tumbler than there is between such wild and distinct forms as the Rock Pigeon or the Ring Pigeon, or the Ring Pigeon and the Stock Dove; and indeed the differences are of greater value than this, for the structural differences between these domesticated pigeons are such as would be admitted by a naturalist, supposing he knew nothing at all about their origin, to entitle them to constitute even distinct genera.

As I have used this term SPECIES, and shall probably use it a good deal, I had better perhaps devote a word or two to explaining what I mean by it.

Animals and plants are divided into groups, which become gradually smaller, beginning with a KINGDOM, which is divided into SUB-KINGDOMS; then come the smaller divisions called PROVINCES; and so on from a PROVINCE to a CLASS from a CLASS to an ORDER, from ORDERS to FAMILIES, and from these to GENERA, until we come at length to the smallest groups of animals which can be defined one from the other by constant characters, which are not sexual; and these are what naturalists call SPECIES in practice, whatever they may do in theory.

If, in a state of nature, you find any two groups of living beings, which are separated one from the other by some constantly-recurring characteristic, I don't care how slight and trivial, so long as it is defined and constant, and does not depend on sexual peculiarities, then all naturalists agree in calling them two species; that is what is meant by the use of the word species—that is to say, it is, for the practical naturalist, a mere question of structural differences....