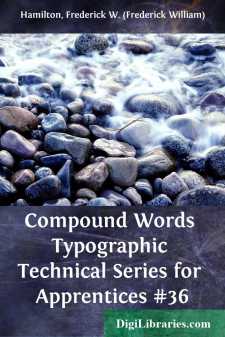 The English language contains a great many words and phrases which are made up of two or more words combined or related in such a way as to form a new verbal phrase having a distinct meaning of its own and differing in meaning from the sum of the component words taken singly. Income and outgo, for example, have quite definite meanings related, it is true, to come and go and to in and out, but sharply differentiated from those words in their ordinary and general signification. We use these compound words and phrases so commonly that we never stop to think how numerous they are, or how frequently new ones are coined. Any living language is constantly growing and developing new forms. New objects have to be named, new sensations expressed, new experiences described.

Sometimes these words are mere aggregations like automobile, monotype, sidewalk, policeman and the like. Sometimes, indeed very often, they are short cuts. A hatbox is a box for carrying a hat, a red-haired man is a man with red hair. A bookcase is a case to contain books, etc.

In which of these forms shall we write the phrase we speak so easily? How shall we shape the new word we have just coined? Which of these three forms shall we use, and why? Ordinarily we look for the answer to such questions from three sources, historical development, the past of the language; some logical principle of general application; or some recognized standard of authority. Unfortunately we get little help from either of these sources in this special difficulty.

The history of the language is a history of constant change. The Anglo-Saxon tongue was full of compounds, but the hyphen was an unknown device to those who spoke it. The English of Chaucer, the period when our new-born English tongue was differentiated from those which contributed to its composition, is full of compounds, and the compounds were generally written with a hyphen. Shakespeare used many compound words and phrases some of which sound strange, if not uncouth, to modern ears, but used the hyphen much less than Chaucer. In modern times the tendency has been and is to drop the hyphen. The more general progression seems to be (1) two words, (2) two words hyphenated, (3) two words run together into one. Sometimes, however, the hyphen drops, leaving two words separated. That there is constant change, and that the change is progressing consistently in the direction of eliminating the hyphen is fairly clear. This, however, does not help us much. At what stage of the process are we with regard to any given word? Which form of the process is operating in any given case?

There are no laws or principles of universal application on which we may build a consistent system of practice....