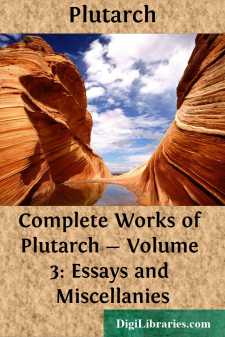 Epicurus's great confidant and familiar, Colotes, set forth a book with this title to it, that according to the tenets of the other philosophers it is impossible to live. Now what occurred to me then to say against him, in the defence of those philosophers, hath been already put into writing by me. But since upon breaking up of our lecture several things have happened to be spoken afterwards in the walks in further opposition to his party, I thought it not amiss to recollect them also, if for no other reason, yet for this one, that those who will needs be contradicting other men may see that they ought not to run cursorily over the discourses and writings of those they would disprove, nor by tearing out one word here and another there, or by falling foul upon particular passages without the books, to impose upon the ignorant and unlearned.

Now as we were leaving the school to take a walk (as our manner is) in the gymnasium, Zeuxippus began to us: In my opinion, said he, the debate was managed on our side with more softness and less freedom than was fitting. I am sure, Heraclides went away disgusted with us, for handling Epicurus and Aletrodorus more roughly than they deserved. Yet you may remember, replied Theon, how you told them that Colotes himself, compared with the rhetoric of those two gentlemen, would appear the complaisantest man alive; for when they have raked together the lewdest terms of ignominy the tongue of man ever used, as buffooneries, trollings, arrogancies, whorings, assassinations, whining counterfeits, black-guards, and blockheads, they faintly throw them in the faces of Aristotle, Socrates, Pythagoras, Protagoras, Theophrastus, Heraclides, Hipparchus, and which not, even of the best and most celebrated authorities. So that, should they pass for very knowing men upon all other accounts, yet their very calumnies and reviling language would bespeak them at the greatest distance from philosophy imaginable. For emulation can never enter that godlike consort, nor such fretfulness as wants resolution to conceal its own resentments. Aristodemus then subjoined: Heraclides, you know, is a great philologist; and that may be the reason why he made Epicurus those amends for the poetic din (so, that party style poetry) and for the fooleries of Homer; or else, it may be, it was because Metrodorus had libelled that poet in so many books. But let us let these gentlemen pass at present, Zeuxippus, and rather return to what was charged upon the philosophers in the beginning of our discourse, that it is impossible to live according to their tenets. And I see not why we two may not despatch this affair betwixt us, with the good assistance of Theon; for I find this gentleman (meaning me) is already tired. Then Theon said to him,

Our fellows have that garland from us won;

therefore, if you please,

We will even prosecute them at the suit of the philosophers, in the following form: We'll prove, if we can, that it is impossible to live a pleasurable life according to their tenets. Bless me! said I to him, smiling, you seem to me to level your foot at the very bellies of the men, and to design to enter the list with them for their lives, whilst you go about to rob them thus of their pleasure, and they cry out to you,

and to excite such tender and delicate motions in our bodies as may chafe our imaginations to some jolly delight or gayety." And therefore you seem to me not so much to take off (as I may say) the pleasurable part, as to deprive the men of their very lives, while you will not leave them to live pleasurably. Nay then, said Theon, if you approve so highly of this subject, why do you not set in hand to it?...