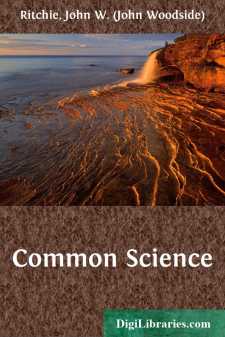 A collection of about 2000 questions asked by children forms the foundation on which this book is built. Rather than decide what it is that children ought to know, or what knowledge could best be fitted into some educational theory, an attempt was made to find out what children want to know. The obvious way to discover this was to let them ask questions.

The questions collected were asked by several hundred children in the upper elementary grades, over a period of a year and a half. They were then sorted and classified according to the scientific principles needed in order to answer them. These principles constitute the skeleton of this course. The questions gave a very fair indication of the parts of science in which children are most interested. Physics, in simple, qualitative form,—not mathematical physics, of course,—comes first; astronomy next; chemistry, geology, and certain forms of physical geography (weather, volcanoes, earthquakes, etc.) come third; biology, with physiology and hygiene, is a close fourth; and nature study, in the ordinary school sense of the term, comes in hardly at all.

The chapter headings of this book might indicate that the course has to do with physics and chemistry only. This is because general physical and chemical principles form a unifying and inclusive matrix for the mass of applications. But the examples and descriptions throughout the book include physical geography and the life sciences. Descriptive astronomy and geology have, however, been omitted. These two subjects can be best grasped in a reading course and field trips, and they have been incorporated in separate books.

The best method of presenting the principles to the children was the next problem. The study of the questions asked had shown that the children's interests were centered in the explanation of a wide variety of familiar facts in the world about them. It seemed evident, therefore, that a presentation of the principles that would answer the questions asked would be most interesting to the child. Experience with many different classes had shown that it is not necessary to subordinate these explanations of what children really wish to know to other methods of instruction of doubtful interest value.

Obviously the quantitative methods of the high school and college were unsuitable for pupils of this age. We want children to be attracted to science, not repelled by it. The assumption that scientific method can be taught to children by making them perform uninteresting, quantitative experiments in an effort to get a result that will tally with that given in the textbook is so palpably unfounded that it is scarcely necessary to prove its failure by pointing to the very unscientific product of most of our high school science laboratories.

After a good deal of experimenting with children in a number of science classes, the method followed in this book was developed. Briefly, it is as follows:

At the head of each section are several of the questions which, in part, prompted the writing of the section....